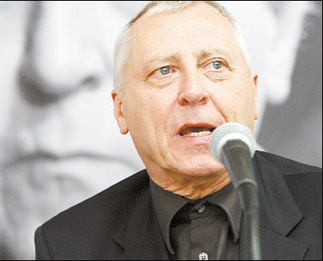 “Cinema is dead,” declared English cinema artist Peter Greenaway to reporters at the Pusan International Film Festival on Monday.
“Most of the films at the film festival are rubbish,” he said.
The virulent tongue of this master filmmaker continued the following day at the master class as he called the press and many other film festivals “parasitical.”
Greenaway, 65, is an acclaimed cinema figure whose long, successful filmography includes graphically brilliant and structurally challenging films like “The Draughtsman’s Contract’ (1982) and “The Cook, The Thief, His Wife and Her Lover.”
He has also made a name for his experimental style of mixing multimedia with cinema as in the “Tulse Luper Suitcases” series in 2003.
Pusan film fest organizers have wanted to get him on the guest list for years, and Greenaway finally said yes this year. He presented his latest film, “The Nightwatching” about Dutch painter Rembrandt van Rijn.
His provocative comments are not surprising, considering his reputation for being glib. Greenaway even had one audience member at his master class say she was “hurt” by his declaration.
Greenaway thinks the majority of films today are “text-based” and like “big TV in the dark” that play “passive, stupid games of sitting in the dark.” He compared much of current cinema to a “colossal and stupid dinosaur” that was “shot in the head on Monday and brain dead yet still wagging its tail on Friday.”
Defining cinema as a “manipulation of artificial light,” Greenaway stressed the need for image-based films. “Cinema language is a brilliant medium, but most people don’t use it,” he said. “Cinema is wasted on cinema. It should be a visual literacy.”
Expanding on the death of cinema, he said, “Let me give you the death date of cinema ― Sept. 31, 1983, the day when the remote control was introduced to living rooms.”
Regarding his latest work, based on Rembrandt’s group portrait “The Night Watch,” Greenaway noted his early career and training as a painter. Paying homage to the 17th painter, Greenaway said Rembrandt was a “painter of artificial light, an innovator and a very, very good painter.”
In this sense, Greenaway argued that Rembrandt and contemporary painters like Johannes Vermeer are the inventors of cinema. His film tells a story about the painter, who finds himself in trouble after using his group portrait, “The Night Watch” as a way to expose the corrupt.
Going forward, Greenaway said his future projects will keep him busy for the next six to seven years.
Those projects include his take on the Old Testament, the virtual reality site called Second Life, a ghost story to be filmed in Kyoto and a film titled “55 Men on Horseback” to be shot in China.