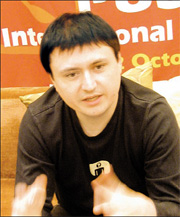 Cristian Mungiu had a busy agenda at the Pusan International Film Festival.
As a festival juror for the new currents section, he attended meetings and showed up for major curtain calls. The rest of his day was filled by interviews about his controversial film “4 Months, 3 Weeks & 2 Days,” which won the Palme d’Or prize, given for the best film, at this year’s Cannes Film Festival France. His film also played at this year’s Pusan Festival.
“People are definitely more serious about listening after winning the award,” Mungiu said. “Hopefully, I’ll make wise use of what I get out of it.”
In many ways, Mungiu is trudging a career path faced by most Asian independent directors.
For one thing, his audience base is from outside his home of Romania. So far, most serious criticism about his work has come from the foreign press.
That trend became more evident when his latest film, “4 Months, 3 Weeks & 2 Days,” a grim portrait of Bucharest under Nicolae Ceausescu’s regime told through a young woman’s experience of abortion, won Canne’s top prize. Despite commercial failure back home, Mungiu is the fourth Romanian director to have won a prize at Cannes in the past three years.
The award, however, didn’t help in securing enough theaters to screen his film back home in Romania, which only has 35 theaters for a population of 20 million people. For his film’s release in September, he finally hired a German technician and traveled around the country to screen his films in small towns where there were no theaters.
“The film’s release put big pressure on me after Cannes,” he said. “People were spreading strange rumors about the film even without seeing it, saying the story was based on real characters and so on.”
His films have shown versatility, both conceptually and stylistically, starting with his debut feature, “Occident,” which he took to PiFAN (Puchon International Fantastic Film Festival) in 2002. His next project was “Tales from the Golden Age,” a personal account of Romania’s last 15 years under a Communist regime ― “the funny but human aspects of a dictatorship,” he quipped.
“In every film, I identify a rhythm, where the next scene is triggered by the previous scene without delay,” he says. “Then I use the story to relate facts as an honest way of storytelling.”