BUSAN ― Just like the weather, the 2007 Pusan International Film Festival had both sunny and cloudy features as it wrapped up its 12-day run yesterday in Korea’s second largest city.
The 12th annual festival closed with a screening of the film, “Evangelion 1.0: You Are (Not) Alone,” a Japanese animation by Hideaki Anno.
Jury members yesterday announced winners of the New Currents competition section of the Pusan festival, which featured 11 low-budget independent films produced in seven Asian nations.
This year, there were three first-place winners: “Flower in a Pocket” by Malaysian director Seng Tat Liew, “Wonderful Town” by Thai director Aditya Assarat and “Life Track” by Korean-Chinese director Kim Gwang-ho. Flower in a Pocket” is a warm and witty description of two children in multi-cultural Malaysia. Life Track is a love story expressing emotions through natural sounds, instead of spoken words. Wonderful Town is a poetic description of the sadness in a Thai village destroyed by the 2004 tsunami.
The festival shined especially brightly in terms of attendance, high-profile guests and films premiered, affirming its status as the biggest film festival in Asia.
Organizers said this year’s 275 films drew 200,000 viewers with scores of full houses. Festival publicist Daniel Kang said it was an increase of 30,000 viewers over previous years.
“What was especially encouraging was that theaters on weekday afternoons had strong ticket sales,” Kang said.
Sellouts for the weekend and evenings is not surprising for the festival, but a 40 percent growth in ticket sales was noteworthy, Kang said.
The festival sought balance by seeking independent or lesser-known films in Asia, and it included a seminar on the Malaysian cinema.
Along with movie stars, the festival also drew a number of master filmmakers of international acclaim, including English director Peter Greenaway of “The Cook, the Thief, His Wife and Her Lover” and Claude Lelouche, the French director of “A Man and a Woman.” The filmmakers gave several lectures.
Not everything was sunshine and roses, however. On the cloudy side, Ennio Morricone, the acclaimed film music composer who won an Oscar earlier this year, had to wait in the rain for five minutes before walking the red carpet at the opening.
What kept the acclaimed composer waiting was a group of presidential contenders and festival volunteers who let the politicians in first. Organizers apologized for mix-up with Morricone’s entrance to the opening ceremony, but denied media reports that the composer complained about the festival.

Another cloud at the festival was the group interview with Greenaway. With no professional interpreter provided, reporters had to resort to a young volunteer student, and the master filmmaker had to stop her for giving short translations of his long answers.
Kang acknowledged that there was some “immature management.”
Still, the festival was an enjoyable as parties, receptions and awards kept the lobbies and ballrooms of five-star hotels overlooking Haeundae Beach hopping past midnight every night.
“We deliberately chose to sponsor Asian Filmmaker’s Night and the Korean Cinema Retrospective, because they were programs that were less likely to get spotlight,” said H.S. Jun, managing director of Hermes Korea, which sponsored a banquet for Asian Filmmaker’s Night on Saturday. 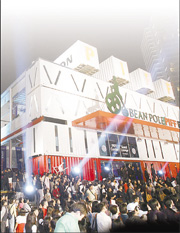 From a business perspective, the festival included about 350 buyers.
The emphasis of this year’s Asian Film Market, which kicked off Monday at the Grand Hotel, was the “Star Summit,” designed to market and promote Asian actors to noted international producers and casting agents.
It also included a series of corporate presentations and discussions on co-production, a rising film industry trend in Asia.
Leading off the event on Monday was Hou Hsiao Hsien, who introduced his period martial arts film “The Assassin.” It was followed by discussions on Tuesday regarding the potential of Asian actors to star in Hollywood productions and a presentation by David Shin, vice president of CJ Entertainment, one of the nation’s largest producers, on investing.
Shin noted that there remain major difficulties in executing co-production projects with the U.S. market, because local producers still prefer Asian remakes than riskier joint projects.
Gore Verbinski, director of the “Pirates of the Caribbean,” starred as a panelist for “Asian Figures in Hollywood Blockbusters,” on Tuesday evening.
“When I watch Korean films, I wonder why I can’t get actors like Song Gang-ho and Choi Min-sik in my movies,” Verbinski said. “But rather than waiting for Hollywood to come in and save the day, Asian producers and actors need to find an economic model for themselves. It should be homegrown.”
On a more intimate scale, Pusan Promotion Plan, a project designed to connect Asian art-house directors to financiers and producing partners, announced a lineup of 35 selections for this year, including Michael Kang’s “The Sea of Tranquility,” “11 Flowers” by Wang Xiaoshuai, “Bi, Don’t Be Afraid” by Phan Dang Gi and “Night and Day” by Hong Sang-soo.
“The festival’s power is in the hands of its market,” said Park Gwang-soo, director of the Asian Film Market.
“It’s undoubtedly a critical part of Pusan. The Asian film market, though, was left virtually untouched by the outside industry until recently. Nobody’s really sure about its potential. The whole point of the venue at this point is to concentrate on securing as much global film networking as possible to introduce who is who.”