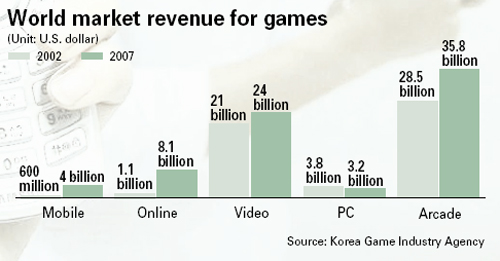 BEIJING ― With the market for mobile games expanding in China, Korean developers are readying a host of products to capitalize on what experts say will be massive growth.
“Following the rapid growth in online gaming in China, mobile games are also growing in popularity,” said Lee Seung-won, the vice president of Com2uS-China, which will introduce new games through the country’s largest mobile service provider, China Mobile. According to the company, the Chinese online game market stands at about 10 billion yuan ($1.3 billion). Considering that the mobile game market is roughly 600 million yuan currently, the company says the sector has huge potential.
Once third-generation mobile service goes into trial service beginning later this year, the mobile game market should grow rapidly, the company believes. Full-scale 3G service is expected in 2008.
Excited by the launch of 3G phones into the world biggest consumer market, many mobile game developers, Korean companies like Com2uS, SK Telecom and ZIO Interactive, have flooded in.
According to the China Internet Network Information Center, in the first half of this year there were 44.3 million mobile telecommunication subscribers playing video games in the country. This is less than 10 percent of the 500 million mobile subscribers. 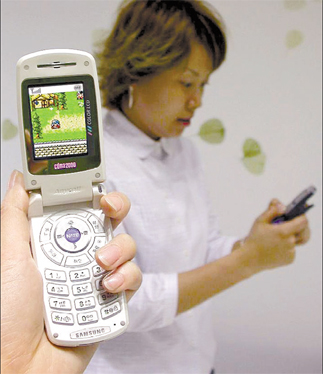 “Korean mobile games have gotten positive recognition in North America and Europe,” said Kim Byeong-gi, the president of ZIO Interactive. “We are confident about our debut in China.”
SK Telecom, the leading Korean mobile operator, is the second largest shareholder in China Unicom, the No. 2 mobile company in China. SK is working with small Korean game developers to prepare for the Chinese mobile game market.
“After selecting competitive mobile games from Korea, we are reconfiguring them to fit Chinese culture,” said Lee Seok-hwan, SK Telecom-Chinaholdings chief executive.
Lee said the company has been sending personnel and designers to China to prepare appropriate content in time for the full scale launch of 3G next year.
“With Korea’s rising global reputation as a developer of state-of-the-art online games as well as mobile games, Chinese mobile telecommunication companies have shown a significant interest in the Korean mobile game industry,” said Kang Shin-hyuk, chief executive officer of MjoyNet, a mobile game developer, and the chairman of the Korea Mobile Game Association. Kang said he was confident that Korean-made mobile games in China will create their own hallyu wave.