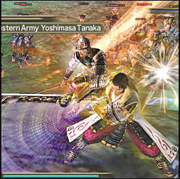 Koei’s action games, particularly the Dynasty Warriors series and its spin-offs, rarely disappoint. Every new release brings new excitement. The same goes for “Samurai Warriors 2 Empires.”
Samurai Warriors, as many gamers remember, is equivalent to the Dynasty Warriors, only the story is based not on China’s “Romance of the Three Kingdoms,” but the war between the shoguns to unite Japan.
The game is as simple on one level. The historical character that the gamer chooses runs around a large battlefield hacking large numbers of henchmen to pieces before completing the objectives ― basically beheading the enemy. However, the latest installment requires thinking, instead of randomly hitting the buttons.
For those who really want to leave their brains on pause in favor of simple button smashing, this game may not be entirely satisfying. In the very beginning the player is given a choice of regions on where they want to begin. This is where your campaign starts and from there the player must pursue ever larger territories through frequent attacks. Many times the player also has to protect territories from enemy incursions. It is crucial that the player build up his army, purchase talented lieutenants and acquire weapons.
This is a huge change from the previous series, which did not require any strategy. But don’t worry too much about the intellectual side. One thing remains unchanged: the bashing of hordes of incoming enemies. Yes! That is why the game became such a favorite in the first place.
This game still rocks.