An arrow that’s fired by the heart

An arrow that’s fired by the heart 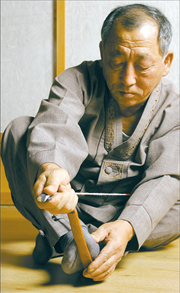 Like golf or horseback-riding, gakgung, or traditional archery, was a form of high-class leisure for the privileged in a Korean society where the wealthy were noted for their arrogance.
Choi Gong-ho, who writes about the history of Korean archery, found that, because of gakgung’s status, a special honorific was used for bow-makers to separate them from other artisans.
Choi also described how, during the reign of Seongjong in the Goryeo dynasty, a prosecutor-general assigned a veteran bow-maker to a ministerial post, praising his skills even though the artisan was from a working-class family and his wife was the daughter of a concubine.
Historical records also demonstrate that traditional Korean archery was seen as a status symbol of the rich and educated, such as the ban that prevented livestock farmers from entering civilian shooting ranges during th Joseon Dynasty (1392-1910).
Ancient archery stressed the spiritual aspects of training. Before the players learned to shoot, they were asked to administer an oath ― never to envy another’s bow.
In many ways, traditional archery was used as a means to cultivate Confucian values and maintain social morality.
In an ancient text that spells out the nine creeds of an archer, students are instructed to keep their mind and body clean, to be prudent, righteous and humble and to learn that victory depends on their state of mind.
The ethical and spiritual restraints stressed in the etiquette of archery often led other dynasties and nations to identify ancient Koreans as “hwal minjok” or “the people of the bows.”

Kwon Moo-suk, a bow-maker for gakgung, or traditional Korean archery, tests the flexibility of one of his bows. By Kwon Tae-gyun

In the past, those in positions of authority took pride in their archery skills as a way of indicating the power they possessed within the royal court.
General Sin Sung-gyeom, who lived during the reign of Taejo (877-943), the founder of Goryeo Dynasty, was cherished by the military for his gakgung skills.
When an enemy beheaded Sin during a battle, mistaking him for King Taejo, the king ordered his officials to produce a golden mold of Sin’s head to put in his coffin as a way of honoring the veteran archer. To protect his tomb from theft, Taejo ordered his men to dig three graves at Sin’s memorial site to complicate any search for his body.
Kwon Moo-suk is a modern day bowmaker, and his skills in the art of gakgung come from his eloquent way of articulating the tradition’s philosophy in his work.
Gakgung also runs in Kwon’s blood. He is part of the 17th generation of a bow-making family. Born in Yecheon County, the breeding ground of traditional Korean archery, his path to becoming a gakgung master was not easy.
For years, he refused to learn the skills, having spent his childhood watching his entire hometown’s obsession with archery.
After he left the army, he came to Seoul, got married and had three children. He got a job as a government officer and the current flowing through his life seemed to be taking him far from archery, until he visited his older brother, a prominent bow-maker, in Yecheon one Chuseok (Thanksgiving Day).
“He sat us down and told everybody that he would be the last bow-maker in our family, because his children had refused to learn the skills,” Kwon said. “He never asked me to take on the responsibility, but I suddenly knew I had no choice.”
It was a decision that everyone in his family disapproved of, except Kwon’s older brother, but Kwon was determined. Shortly after he brought his older brother to Seoul and officially entered the business. Kwon was 38. By the time he was designated as an intangible cultural asset by the Seoul city government in 2000, nearly two decades had passed.
But Kwon’s life-altering experience did not become complete until he read the “Bowmanship of Joseon,” which chronicles the history, technique and philosophy of traditional Korean archery. It was published in 1929 by Lee Jung-ha, a Korean linguist.
“It’s a sensational text,” Kwon said. “I was blown away by it. It was an independence movement in its own right, showing that ‘the bow is the spirit of Korean people.’”
The pride that Koreans take in the traditions of archery is sometimes hard for foreigners to fathom.
Korean archers are arguably the best in the Olympic version of the sport and they always perform well in international competitions. They may owe this success to traditions established by their ancestors, which supposedly date back to prehistoric times. Some historians have argued that in Korea, archery predates farming as a means of obtaining food.
Throughout history there has been a fierce effort to maintain Korea’s archery traditions. The bow was the main weapon used by the army before the advent of guns in the 19th century. From then on, archery became a sport with many dedicated adherents.
In “Nanjung Ilgi,” the war diary of Admiral Yi Sun-shin written between 1592 and 1598, says that Korean arrows used in battle could travel more than 700 meters.
When this news spread the artisans of Silla were commissioned to produce bows for the Tang Dynasty. When filling the order, the Silla bow-makers deliberately shipped arrows that had a diminished capacity for flight, telling the Chinese authorities that salt must have got into the wooden surface of the bow on the sea voyage and destroyed some of its flexibility. 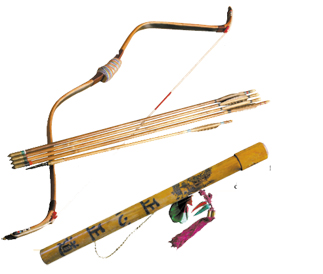 A bow, case and arrows for gakgung, or traditional Korean archery.

The techniques of bowmaking were kept secret from then on, as bows were seen as a central element of national defense.
As a result of this secrecy, Lee’s 1929 book was the first to offer details of the traditional techniques of bow-making. The book took eight years to complete and was put together by 36 writers.
Gakgung was also an important part of the health regimen of wealthy Koreans.
“It was the only way for the wealthy to keep their muscles toned and avoid digestive problems,” Kwon said. “Upper-class Koreans never ran, even when it rained, because they thought running was despicable. Archery was a socially acceptable way for them to strengthen their muscles and improve their breathing techniques.”
This tradition faded over the years, especially after the fall of Joseon, when being an archer was no longer seen as a sign of wealth or privilege. An indication of this is a popular song from the 1920s which goes “A skilled archer does not make a man, but a man who spends a lot of money makes a man.”
Some rituals have survived. At most archery schools across the country, government funded instructors will not take “vulgar” cash from students. The custom is that the students show gratitude by buying the instructor a drink.
There were once 48 archery pavilions around Seoul, but most have vanished. One of the few surviving pavilions is Hwanghakjeong, built in 1898 by King Gojong. It was originally located in Gyeongbok Palace but has now been moved to Sajik Park.
Formally, two types of bows are used in traditional archery. One is a modern laminated bow, weighing about forty pounds it is 50 inches long. The other type is the traditional Korean bow made from the horns of water buffalos.
Kwon specializes in the latter type and each phases of producing them is difficult. The central bone of the bow is made from bamboo. Then cow sinew, imported from Northeast China, is pasted onto the limb of the bow with glue made from a blowfish bladder. In the last step, an extra layer of water buffalo horn is attached to the central frame to improve the bow’s reflex. The entire procedure takes up to three months.
Both in the rituals for making bows and in their shooting, gakgung bow-makers pride themselves on being different from mainstream archery. For one, the size of the target is much larger in gakgung.
“For archery all you need is a sharp eye and strong arm work,” Kwon says. “For gakgung, you shoot with your heart. Whether you succeed or fail depends on your mind. At least that’s the traditional teaching.”