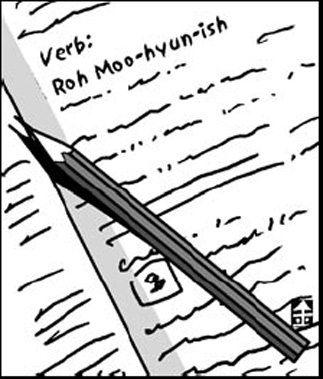 Lao-tzu ranked the ideal ruler based on Taoist virtues.
The No. 1 ruler was one who was so unobtrusive in his dealings with the people that they did not even know there was a king. The next was the king that people praised. The third was one who showed absolute power, using his authority to the utmost and ruling with an iron fist. The absolute worst, the lowest king of all, was the ruler who was looked down upon and made fun of by the people.
Currently in Japan, with the entrance examination season coming up, there is a new expression catching on quickly among harried test-takers.
They ask, “Atasi, mou Abe-shichaokana?” It means, “Why don’t I just do an Abe?”
It expresses the mind of those students who want to quit in the middle of an exam, referring to how Shinzo Abe, the former prime minister, abruptly announced his resignation. The country’s former leader has become a subject of ridicule in the newly coined phrase.
Recently, when the National Academy of the Korean Language announced the word nomhyun-seureobda, or Roh Moo-hyun-ish, in a dictionary of new words, the Blue House remarked, “It is a debasement of the head of state.” The meaning of the new word is “giving disappointment, as expected.”
Although the books have not been recalled yet, distribution has been stopped.
Though the persons whose names gave currency to the words might feel it is unfair, it is remarkable that the new words have found public acceptance.
Lao-tzu, who said that the worst leader is one who is mocked by the people, noted that the most important character of a leader is “having faith in the people and not interfering with them.” The most prized virtue, according to Lao-tzu, is “valuable words.” It means that leaders should save their words and not interfere with the people unnecessarily.
Even if ranking our leader is irrelevant to the subject, it seems that the Blue House’s response, interfering with the dictionary of coined words, goes against Lao-tzu’s teaching.
And so do the president’s remarks, such as, “Since my approval rating has gone up quite a bit, I have secured a base [enough to afford] to lose some,” and “According to the Constitution, the northern territory is also our territory, but it confuses the people to be drawing a line, the Northern Limit Line in the West Sea, and arguing that it is the border line.” He thus confuses the people with his own comments.