[Viewpoint]Don’t cross the line, at least for now

[Viewpoint]Don’t cross the line, at least for now 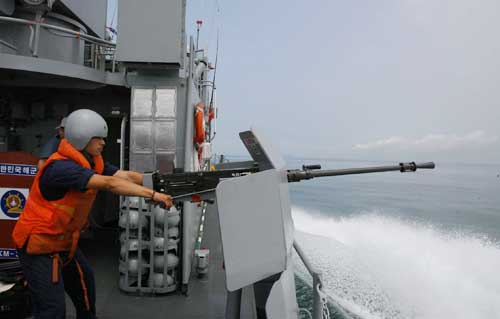 Article 3 of the Constitution states that “The territory of the Republic of Korea shall consist of the Korean Peninsula and its adjacent islands.” This article means the northern half of the peninsula is being ruled illegally by the regime in North Korea.
However, a new interpretation of the article emerged after the Cold War ended and relations with North Korea changed radically.
Based on the argument that since it is difficult to consider North Korea to be a political entity because the South and the North already signed an inter-Korean basic agreement in 1992 and both Koreas were admitted into the United Nations as members simultaneously, the new theory held that it was better to scrap the article and put more weight on Article 4 of the Constitution, which stipulates the need to pursue peaceful national unification.
This interpretation provoked heated debate because people began to argue for discarding the article on the national territory through a constitutional revision.
However, most constitutional law scholars recognize the significance and necessity of keeping Article 3 of the Constitution, and the precedents set by the Supreme Court and the Constitutional Court that interpreted the article positively.
This is because the confrontation between the two Koreas has not yet come to an end, and although relations between South and North Korea may have improved a lot compared to the past, the existence of the article on the national territory is considered necessary for the resolution of issues regarding North Korean defectors and national unification.
If North Korea is acknowledged as an independent country, it becomes difficult to justify unification and prevent the intervention of a third country, such as China, in inter-Korean affairs. It would also remove the grounds for the South Korean government to protect North Korean defectors.
Therefore, although the two Koreas act internationally as two independent states, it is necessary, in inter-Korean relations, to be on the alert and to keep vigilant against the North while maintaining a special relationship of pursuing national unification together.
The recent statement by President Roh Moo-hyun regarding the Northern Limit Line sparked a multi-dimensional controversy in our society.
Putting aside the criticism that the president of the Republic of Korea ― whose first priority is to protect the national territory ― is seen as giving up on its protection, questions are being raised as to whether it is appropriate for the president to make such a statement at this time and whether it contains any political intentions.
Strictly speaking, the limit line is not a territorial boundary. A boundary line that runs between the territories of two countries is the national boundary. Since the relationship between South and North Korea is not of this nature, the Northern Limit Line or Military Demarcation Line cannot be considered as borders. Considering them as borders would also be in violation of Article 3 of the Constitution ― because as defined, the Yalu and the Tuman rivers, the geographic borders of the Korean Peninsula, are the national boundary of the Republic of Korea.
However, this should not undermine the significance of the limit line. Just as the Military Demarcation Line, which is not a national boundary, has separated the South and the North for more than 50 years, the Northern Limit Line has also played the role of a maritime demarcation line between South and North Korea.
It has been maintained for more than 50 years, and we cannot take the significance of the line lightly. It has been defended by the blood and sweat of numerous soldiers.
I do not mean to say that an alteration or termination of the Northern Limit Line should not be considered. If it is acceptable to the residents of the five islands in the Yellow Sea and the Korean people; if it helps the exchanges between South and North Korea and if it prevents intrusions by Chinese fishing boats into our waters ― there is no reason for us to oppose the establishment of a new maritime demarcation line through consultations with North Korea. But it should not be made by denying the existing Northern Limit Line.
Even if the line was imposed one-sidedly by the United Nations Command without North Korea’s assent, as President Roh said, denying ourselves the regulatory power of the line that has been observed for more than 50 years will cause many problems. For example, should we apply the same logic to the Dokdo Islets, which South Korea is actually occupying without an agreement with Japan?
It must also be pointed out that such an important problem should be left to the next government rather than being decided by President Roh, who has only four months left in his term of office.
It is not a simple matter of the wrapping up of an existing policy.
If an outgoing president raises a new issue that will create a lot of controversy among the people and makes unreasonable decisions during the closing days of his term, it will not only present a big burden to the next government, but also cause a serious aftermath to the whole nation.

*The writer is a professor of constitutional law at Korea University. Translation by the JoongAng Daily staff.