The oldest profession has the darkest pain

The oldest profession has the darkest pain 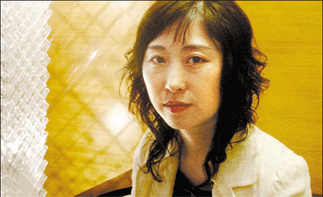 Kye Un-kyoung, the director of “Unnie.” By Chun Su-jin

BUSAN ― Before she met a group of former prostitutes, documentary filmmaker Kye Un-kyoung imagined they might be different from other people. Out of curiosity Kye asked a friend, a volunteer who worked with prostitutes trying to rehabilitate their lives, what they were like.
Instead of trying to explain, the friend invited Kye to participate in a session at the rehab center, where she could listen to former prostitutes as they described their past nightmares and struggles to build new lives.
Kye, 35, soon realized that her prior beliefs about prostitutes were based in prejudice. She also learned that the women constantly battle against a thick layer of indifference and hostility.
“I felt a strong urge to do something,” Kye said.
She ended up doing what she does best ― making a documentary titled “Unnie,” which was presented at the Pusan International Film Festival that ended last Friday.
When she began filming in 2005, the first anniversary of the government’s new anti-prostitution law was approaching, which seemed like a timely opportunity to examine the effectiveness of the legislation.
The title, “Unnie,” is derived from a Korean word that is used by women to describe an older sister, but it is also used in brothels to refer to prostitutes. “When men in red-light districts use the word ‘unnie,’ it tends to mean a prostitute,” Kye explained. 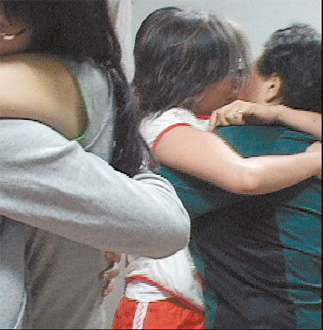 A scene from “Unnie,” a documentary about former prostitutes struggling to build new lives.

The word is used by the volunteers at the rehab center and the former prostitutes to refer to each other, as a form of sisterly solidarity, and this is what persuaded Kye to call her film Unnie.
Kye studied documentary filmmaking in New York and she has won acclaim for her work, especially “Pansy and Ivy” (2000), a film about the disabled that has won her several awards at international film festivals.
Kye spent two years making the 80-minute documentary. She began by studying and talking with between 15 and 20 former prostitutes.
“I discovered that there were so many things I didn’t know,” Kye said.
To make her film she had to fight her fear of going to the Wanweol-dong red-light district, which she described as “a place of violence.”
Talking to the former prostitutes was not an easy task. They were isolated from society and cursed constantly.
“The former prostitutes are so disassociated from society that after they escape from the streets they find it hard to even ride a bus or subway,” Kye said.
The hardest part was to break down the prostitutes’ defenses and get them to talk from the hearts. To that end, the volunteers at the rehab center were an invaluable bridge.
Thus one axis of her film is the rehab center’s dedicated volunteers; the other is the former prostitutes.
The volunteers, women ranging in age from early 20s to 50s, often suffer abuse along with the former prostitutes and get cursed at and sometimes attacked by brothel owners.
Kye was able to get the former prostitutes to open up to her and share their stories.
However, Kye found it hard to sleep at night after listening to stories of perverted “clients” and the services they demand.
After Kye finished filming, the former prostitutes became anxious. “They didn’t want any trace of their faces or voices to be recognizable in the film,” Kye said. “The social stigma against prostitutes is still too strong, and they were aware of that.”
However, Kye found that she was the biggest censor of her own work.
“So many of their stories described things that were too cruel or dangerous to be put on screen,” Kye said. She shot 100 hours’ worth of film, and ended up with an 80-minute documentary. 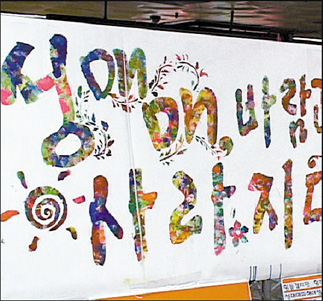 A banner at the rehab center reads, “Sex trafficking [should be] gone with the wind.” Provided by the Pusan International Film Festival

Describing her film as a “labor of love,” Kye said that she gets angry at the idea that prostitutes choose their professions to make easy money.
“The vast majority of prostitutes had no choice,” she said. “They were either raped or sexually harassed or were too poor to do anything else.”
Kye said that she hardly ever saw a prostitute with money because the business has so many layers of exploitation that take money from the women, starting with the pimps who control the brothels and surrounding streets. And there is the threat of violence from clients.
“Prostitutes’ lives are always in danger, because they never know what kind of person they are with,” Kye said. “Something should be done to put an end to this.”
Kye had harsh words for people who are indifferent to the prostitution issue. She believes it should be everyone’s business because prostitution affects the whole community. Kye also said that the core of the issue are the social conditions that drive women on to the streets.
“Anyone can become an unnie,” she added. “That’s the scary part.”
Following the film’s sold-out screenings in Pusan, Unnie is now scheduled to be shown in Seoul by the Association of Korean Independent Film and Video.
Kim So-hye, an association member, said Unnie is one of the films that will be screened between Nov. 8 to 22 to celebrate the opening of a theater for independent films at the JoongAng Cinema. The association is also considering putting on a screening with English subtitles, Kim said.