Michael Kang is in an ambivalent position when it comes to his new feature film “West 32nd.”
It is the first U.S. production funded by CJ Entertainment, one of Korea’s major producers. The film is targeted at American audiences and dips into the hidden subculture of a shady Koreatown in New York City.
However, at the heart of West 32nd is an emotional resonance that touches on sentiments that are too deeply Korean for this to be a full-fledged American film.
“To me, the most satisfying part of making West 32nd was bringing it to Korea,” Kang says, referring to the screening of his film at the Pusan International Film Festival last week. “It’s really a love letter to Korea.”
This was Kang’s second visit to the festival. He came to the Pusan last year with “Motel,” an earlier a coming-of-age comedy about a teenage boy from a Chinese immigrant family who helps his mother clean the family’s motel.
The characters of West 32nd experience similar degrees of displacement as the boy in Motel. 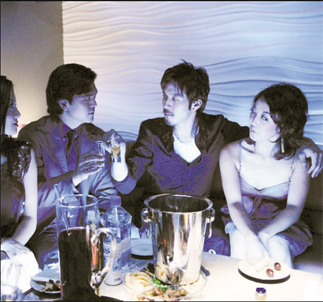 A scene from “West 32nd.” Provided by the Pusan International Film Festival

West 32nd focuses on the murder of a Korean bar manager by a 15-year old-boy in New York’s K-town.
John Kim (John Cho from “Harold & Kumar Go to White Castle”) is an ambitious Korean-American lawyer who takes the case pro bono to get publicity for his firm and to prove the boy’s innocence. Kim then finds himself mixed up with Korean gangsters.
“I wanted to introduce a broad spectrum of Korean-Americans through the film,” Kang says.
That’s exactly what the film does, as it hops between John’s mingling with the upper echelons of white Manhattan society and the teenage Koreans who practice their break-dancing moves in the alleys of Flushing.
The film, a bilingual production, examines various versions of the Korean-American experience and finds that, in each case, there are people “longing to make a connection” and fit in with mainstream American culture.
There is John who uses his “Asian advantages” to climb his way up; Jane, an illegal immigrant who work as a hostess in a hostess bar and Mike, a Korean-American bar manager at Mama’s who comes off as “too American” for the Korean owners.
The film picks up on a lot of the cultural nuances including subtle details like the friction between the Korean and Chinese communities and songs that young Korean-Americans sing at karaoke bars to imitate the older generation.
The film was very popular with the Pusan festival audience. It was screened at three different theaters and each one was jam-packed.
CJ, the film’s producer, signed a deal for the German distribution rights during the festival’s Asian Film Market.
“It was really convenient to work with CJ, because we didn’t have to try and explain a lot of subtle issues about Korean culture,” Kang says. “If this film had been produced in Hollywood, it would feature some white guy coming into K-town and investigating the crime. That would be somebody else’s story, not mine, because this film evokes my personal experience that examines the relationship that gyopos [Korean-Americans] have with Korea and Korean society.”