A home where dreams become movies

A home where dreams become movies 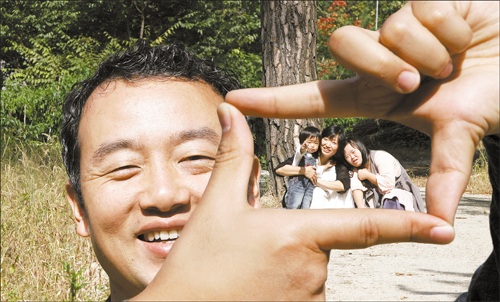 Documentary maker Seo Dong-il with his wife Jang Cha Hyun-sil, their daughter Jung Eun-hye and son Seo Eun-baek outside their home in Yangpyeong. By Jeong Chi-ho

Seo Dong-il is an aspiring documentary director, struggling to make his dreams come true on a sporadic income.
Jang Cha Hyun-shil is a successful cartoonist who has battled the stigma of being a divorcee. Cha is her grandmother’s surname, which she uses along with her father’s surname to express her independence and feminist spirit.
Jung Eun-hye is an 18-year-old girl with Down’s syndrome who dreams of someday dancing in the spotlight.
These three people have different dreams, different skills and different surnames but they are all part of one family.
Seo, 36, and Jang, 43, got married in 2005, shortly after their son, Eun-baek, was born they had already lived together for about a year. Eun-hye is Jang’s daughter from her previous marriage. Their house in Yangpyeong, Gyeonngi, has a cow shed nearby, a view of the mountains and a stream and it is usually filled with smiles and laughter.
But this sylvan world, with its conservative rural values, is a place where being different is often a magnet for prejudice and discrimination. People sometimes stare at them and label them “odd.” The family’s response has been to celebrate their differences on film.
Several months ago the family added a new member a 6 millimeter video camera that recorded every aspect of their everyday lives.
Thus “Big Girl, Little Girl and a Guy in Between” was born.
Before starting the film, Seo presented his idea to the organizers of the Pusan International Film Festival and was pleasantly surprised when they offered him funding. Seo jokingly said that he “tried his luck” because his limited budget had been the biggest obstacle to his career as a documentary maker.
Big Girl, Little Girl and a Guy in Between was screened at this year’s Pusan festival, which ended last Friday. The “big girl” is Jang the “little girl” refers to Eun-hye and Seo is “a guy in between.” The film is not about making the family look good. Rather, it is a factual description of their daily lives.
In some parts of the 78-minute documentary the couple, under the influence of soju, are seen arguing about who should do the household chores. Jang is the main source of the family’s income while Seo seems determined to be a stereotypical Korean male and stay away from housework.
Because the documentary is an honest depiction of the family with fighting, making out, loving and laughing, it gets the audience to address several social issues, including the prejudice against the disabled and the role of men and women in the home.
The camera also probes the personal issues confronted by this unconventional family. In one scene, Jang quizzes her younger husband about a confidential online message he got from a young, single woman. In another scene, the camera watches Jang talking to a friend on the phone as she shares a dark story about her abusive father.
One thing that all these scenes have in common is that the characters say what’s on their mind and communicate with each other. In doing so their relationships improve and the family gets stronger.
“We may not be a ‘normal’ family, but I think that every family, no matter how normal it looks from the outside, has its own set of problems,” Jang said. “We just opened up our family on film and we could see that communicating with each other created a better result.”
Seo agreed and said, “When you have problems, it’s best to have them out in the open and share them with the other people concerned, instead of having them fester.” 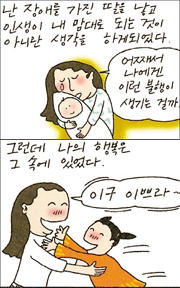 The film is very honest and Seo confessed he felt “embarrassed” during a question-and- answer session after the screening at the Pusan festival. “It felt like being naked,” Seo said. The audience, however, gave the family members a big hand for having the courage to tell their story so candidly.
Seo is now putting some finishing touches to the documentary, along with several animated scenes provided by Jang, and they hope to present the new version at other international film festivals.
Jang is no stranger to displaying her private life in public her cartoons are like personal diaries. Before she met Seo her life as a single, divorced mother with a disabled daughter was tough, and an endless source of subject matter.
Her difficult path began a few days after Eun-hye was born. Her doctor called to say that the baby was “strange” and had Down’s syndrome. “Nobody wants a baby like this,” the doctor said. “Even if you throw it on the street, no one would bring it home.” Jang was stunned when her doctor added that the baby was unlikely to survive beyond 16.
Instead of giving up hope, Jang tried to give her daughter the best life possible. Jang named her daughter Eun-hye because it means “blessing” in Korean. Eun-hye is 18 now and healthy and lively.
“I became a more mature human being while I was raising Eun-hye,” she said. “People would stare at us, but we didn’t care we put ourselves at the center of our world and we were happy.”
After her divorce, Jang, who majored in Oriental painting at college, had to find a job and ended up drawing cartoons. “I had no choice,” she said “I had to earn money and that was my motivation for starting cartoons,” Jang recalled. As Jang matured, her cartoon series became like diary entries and she developed a large fan base. Eun-hye was her inspiration for the cartoons and the collection was published as “Mommy, Stop Doing Lonely Things and Let’s Eat.”
In 2004, Eun-hye blessed Jang again by helping her to meet the love of her life. Back then Seo had just quit his job to pursue his dream of being a film director. While working in the advertising department of a conglomerate, Seo had nurtured his ambition by taking film classes after work and by making a short documentary about the disabled. Then he read a story about the disabled and their sex lives and he felt a strong urge to work full-time on a documentary about the issue. He quit his job and started work on the project.
In the course of making his film he felt the need to meet the parent of a disabled child and a friend introduced him to Jang. After talking for several hours, Seo realized he had fallen in love. “Her indomitable mindset and the way she was using it to raise her disabled daughter was incredibly attractive,” Seo said.
The seven-year age gap between them was not much of an obstacle to the couple, although it was something that others like to gossip about, especially as Seo is younger than Jang.
“We just happened to fall in love,” she said. “But people sometimes tease me for ‘stealing’ a younger man.” Jang sees this as a pleasant kind of prejudice, compared to the discrimination Jang faced as a divorcee with a disabled daughter. Fortunately, Seo’s parents were open-minded enough to accept Jang as their daughter-in-law.
After the first blush of love came harsh reality. “The start of a romance is like a sea voyage that feels great but it’s bound to end,” Jang said. “We found ourselves back on land, with many real problems.”
The main issue was money. 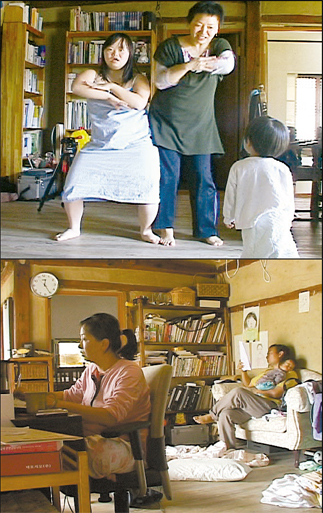 Eun-hye, whose dream is to be a pop singer, practicing her dance moves. Bottom: Jang Cha Hyun-shil works on a cartoon while Seo looks after their son and and does the laundry.

Seo’s first feature documentary, “Pink Palace,” was named after a brothel for the disabled in Australia and it explored the sex lives of people with disabilities. It engendered controversy and acclaim but not enough money to cover the couple’s living expenses.
While Seo pursued his dream Jang was left to earn money and take care of the household chores.
One of the most interesting parts of the film is where Seo learns to be a house husband, breaking social stereotypes about men. Seo now considers his new role to be a precious part of his life. “I learned that caring for children is a huge privilege, which too many Korean men give up because they have been raised to surrender that responsibility to their wives,” Seo said.
The couple, meanwhile, is also grateful for the presence of Eun-hye. Although her classmates used to tease her and call her “fatty catfish,” she is still determined to become a celebrity singer and dancer.
In 2005, she took a step toward her dream when she starred in a group of short films called “If You Were Me 2,” about children with Down’s syndrome. Seo and Jang are also working on a film starring Eun-hye the couple wrote the screenplay together.
In the meantime, Seo has a number of projects in his head, with a dream to make feature films about the disabled, including a “comic and sensuous film” about a 24-year-old man with cerebral palsy.
He is not sure whether he will be able to realize his dreams but he can smile knowing he has a home sweet home to go back to.