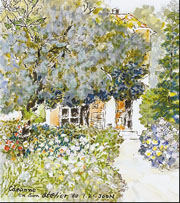 The paintings of Joon Lee are an anthropological study of the history of modern art in Korea. They pose an ideal model of “Western-styled art,” which dominated the local art scene long before names like Andy Warhol and Jackson Pollack began to penetrate the style and conception of modern art here.
Lee’s trademark paintings are familiar to most Koreans who went to art school in the 1980s. His mosaics of circles and triangles, known as “geometric art,” later became the basis of academic assessment in Korea. Major art schools asked students to do pieces in Lee’s style as a way to test their craftsmanship and ability to arrange compositions.
One of the central themes of his work is composition, which recreates nature and light in a symmetry of lines and planes. In his later paintings Lee uses similar musical rhythms manifested by artists like Wassily Kandinsky. Paul Cezanne’s reduction of his subject matter to geometric structures deeply influenced Lee.
But most importantly, Lee’s work was significant in the context of Korean modernism, a movement led by a group of Korean abstract painters that dominated the local art scene in the 1970s. Works of this era largely relied on shapes or symbolic patterns extracted from traditional Korean imagery.
“He did not simply apply motifs to portray Korean texture and sensitivities,” writes art critic Kim Mi-jung in the exhibition catalog. “He emphasized capturing the images of a changing and developing Korean society in 1970 rather than relying on reminiscences about the past.”
For example, in “Thunderous Sound,” Lee’s work from the National Art Exhibition in 1978, he entwined circles and lines to reference cogs and conveyor belts at large factories in Korea at the peak of the nation’s rapid economic growth.
Formally, Lee went beyond “geometry abstraction,” using unconventional materials like corrugated cardboard or paper tape to create deep layers and textures to a surface. Instead of sticking to lines and triangles, he incorporated organic images of nature. 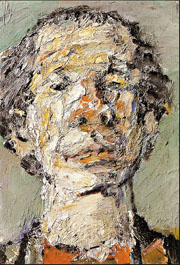 “Self Portrait” Provided by the organizer

The works in his current retrospective at Aram Art Gallery span his earlier figure paintings of female nudes to recent abstracts including sketches of street scenes in pen and watercolor during the artist’s visit to Europe.
In the show, his paintings provide a sharp glimpse into the development of Western-style art in Korea, a genre that local critics now call Korean modernist art.
His pictorial sequence of watercolor sketches of street scenes in France and Spain captures the sentiment of Bohemian art practiced among street artists in Europe.
His geometric compositions delve into formal elements of art like the intricacies of color or division of planes. They reflect the ideals of art that were used as a Western-based formula among the earlier generation of modern Korean artists.