A promise redeemed in the form of a film festival

A promise redeemed in the form of a film festival 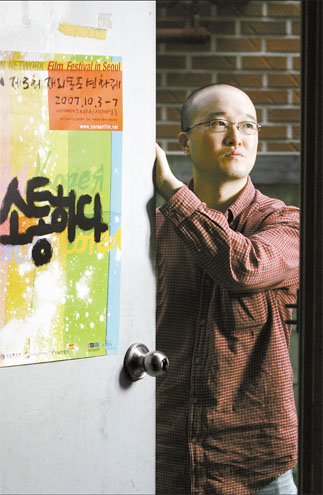 Kim Gang-su, the founder and director of the Overseas Koreans Film Festival. An encounter with a former comfort woman drove him to initiate the festival. By Jeong Chi-ho

kim Gang-su made a promise nine years ago but he didn’t realize it would dwell in his thoughts like a poltergeist, throwing reminders of its existence around his consciousness at random intervals.
During Kim’s first year as a volunteer for Korean International Network volunteer, or KIN, he followed a Korean-Chinese coworker to his hometown near the Heungleung River in China to film a documentary.
“It was deep in the countryside,” Kim said. “We met and interviewed three elderly Korean females who, decades before, had been forced into prostitution by the Japanese army. They were living in this seedy-looking place, which looked like a cross between an orphanage and an asylum.
“After the interview, one lady made me promise to return and take her back to Busan, her hometown. But I never saw her again. It haunts me. I think that’s why I created the Overseas Korean Film Festival to try to meet her again someday and keep my promise.”
This month, the annual festival, organized by KIN, was held for the third time with over 50 films from eight different countries.
The films are a mix of documentaries and feature films about the lives Koreans lead overseas.
“Although the festival is called the Overseas Korean Film Festival its main themes are very universal,” Kim said. “We are all related in some way and everyone, throughout their lives, questions their identity, feels isolated and worries about their family and their place in the universe.”
Through the festival’s films, Kim hopes the audience can feel empathy for the characters and recognize some parts of Korean history that are not celebrated in school textbooks.
“In a way, the history of those old ladies, the comfort women, is our lives as Koreans,” he said. “Their experience is our experience, of losing our country and identity to Japan, being driven out of our homes and forced to be nomads.
“Although now the way we live seems to be comfortable, we often try to hide the dark moments of the past. It seems as though we are trying to forget our past too quickly.”
He says it is especially important that the subject of overseas Koreans be analyzed and shared from a cultural vantage point.
“When I first joined KIN, I wanted to create change through political activism,” Kim said. “I realize now that it is stories and films, as much as politics, that change people’s lives. After all, don’t we create the possibility of change when we plant a thought in somebody’s mind that grows and shifts the mood of society?”
Of the first International Day held in Korea this October, Kim says he hopes the occasion “Will not be just a symbolic event but an ongoing effort to recognize the 7 million plus Koreans who live overseas and the 1 million foreigners residing in Korea. These people are going to be a part of our culture for hundreds of years, and it’s time to communicate with them and look to the future.”
In Lucy M. Montgomery’s novel “Anne of Green Gables,” Anne questions the accuracy of an old Shakespeare quote.
“I read in a book once that a rose by any other name would smell as sweet but I’ve never been able to believe it,” she says as she expresses discontent over her plain name. “I don’t believe a rose would be as nice if it was called a thistle or a skunk cabbage.”
For Korean-American Obn Taylor, the problem wasn’t a “plain Jane” complex but the deeply-rooted identity crisis his name engendered.
“I wanted my face to match my name,” he says in a documentary about him shot by director Lim Jong-woo. “I changed my name in May [to Lee Myung-bo]. It was something I had wanted to do for a long time.”
Taylor, now Lee, was born in Korea but abandoned by his parents at an early age and, like many Korean children, he was adopted by an American family.
When his adoptive parents got divorced, he needed to pay for his own college education so he enlisted in the U.S. army.

Stills from “Kook Min Hur” (top) “Urinara” (middle) and “The Return of Superman” (bottom), films that were shown at this year’s Overseas Korean Film Festival in Seoul. Provided by the organizers

During the eight years he served, the war in Iraq broke out.
The army deployed Lee to Iraq in 2005. Speaking about the cards that he partially dealt to himself, he says, “It was not the greatest bargain.”
The documentary, titled “The Return of Superman,” describes Obn’s journey as he searches for his identity. It follows him from battle zones in Iraq to Korea as he searches for his sister. Despite the weighty subject matter, Lim uses animation and graphic shots to give a different feel to what he calls, with self-deprecating humor, “another anti climactic Korean adoptee story.”
“I really tried to stay away from an overly sentimental melodrama,” Lim said. “I think people always expect a special adoptee story, maybe because we feel a sense of relief when we see someone succeed after we, as a nation,rejected them. Or maybe it is our way of forgetting our original sin [of giving them away in the first place] by trying to help these people.
“By doing this, however, we are not seeing, or we are trying not to see, that their lives are not much different from our lives.”
For directors like Lim who participated in this month’s “Overseas Korean Film Festival,” this separation and regrouping, whether it is between different races or natives and adoptees, can be found in all aspects of their lives and serves as a common thread in all their work.
“I experienced alienation and prejudice from the Japanese and the Korean-Japanese, which was doubly hard,” said Ha Jin-sun, who recently made her first documentary, titled “Urinara” (Our Country). As well as the Overseas Korean Film Festival, it has been shown at numerous festivals in Japan including the Yokohama Film Festival .
A single working mom, Ha quit her job two years ago and enrolled in a film school in Japan. Ha had previously film at Hanyang University before she got married.
“I married while I was still at university and never graduated,” she said. “I wanted to take my last shot at my dream of becoming a director.”
Urinara is a documentary about her son, Im Yoo-sang, and his life before he enlists in the Korean Army.
Ha divorced her husband of four years when Yoo-sang and his sister were in grade school.
“It was 15 years ago and back then, society just couldn’t handle a divorcee. It was hard even to get a job,” she recalled.
Without any definite plan, she came to Japan and started working at an automobile factory.
As she and her family hold both Japanese and Korean citizenship, Yoo-sang had n option not to sign up for mandatory Korean military service.
“In a way, people might think it is strange to make a documentary about a country that rejected me,” she said. “But I wanted to show the duality that the bonds of nationality create.
“People living in Korea, the Korean-Koreans, might not be interested in seeing these films but their themes of self-identity, isolation, hope and a sense of belonging are so universal.”
For Roberta Jang, the search for self-identity lies in examining the truth of our history. Her documentary “Kook Min Hur” traces the development of the Korean National Association, the oldest Korean organization in Hawaii, through tales of descendants from the “first wave” of Koreans in America.
“Many Koreans scold Japan for their textbooks and the manner in which they depict their history with Korea in a biased fashion but we [Koreans] must be truthful about our history as well,” she said.
Jang explained that president Syngman Rhee, although revered by some Koreans as a freedom fighter, had many dimensions to his political life, and some things he did as an important figure in Hawaii betrayed the Korean immigrants in order to secure his own place in the political arena.
Ms. Jang says she hopes to work with Korean researchers and historians on this topic in the future.
Jang emphasized the need for events like the Overseas Koreans Film Festival, that probe beneath the layers of Korea’s modern history.
“If I hadn’t made an effort to make a documentary about Kook Min Hur, I think a lot of the history of my friends, my family and the Koreans in Hawaii could easily be lost,” she said.