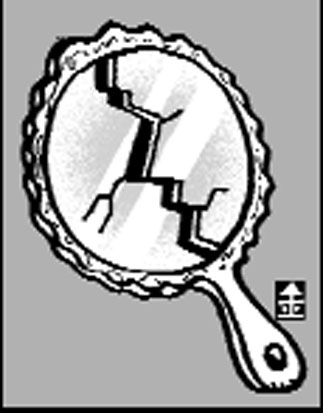 Lady Jin Jong was an outstanding female figure in Chinese history. She was a princess of the Jin Dynasty about 1,400 years ago. Many people who likewise came from noble families courted her for marriage, but she turned them all down, looking for humbleness instead of splendor. She chose as her partner a man named Suh Deok-on, who had an ordinary background but demonstrated extraordinary literary brilliance.
During that time, the Sui Dynasty in the north was gaining power. The Jin Dynasty was soon defeated by the Sui. The fall of the Jin Dynasty brought enormous changes to the life of this happy couple. The royal families of the perished kingdom were taken to Zhangan, the capital city of the conqueror.
Jin Jong broke her copper mirror into two before she had to leave her husband, and gave him one half. They promised to meet every year on Full Moon Day with the two pieces. Then they had to tearfully separate.
After involuntarily being sent to Zhangan, Jin Jong became a mistress of one of the royals in Sui, a renowned general. On the first Full Moon Day after the tearful separation, Jin sent her maid to the street to sell the halved mirror.
The princess intentionally tagged it with an absurdly high price and nobody bid to buy it. Surely, she meant to find the other half of the mirror. The next Full Moon Day also went by without a sale. On the third Full Moon Day, the maid who performed the same duty every year delivered the princess puzzling news, which perhaps she had been waiting for. A man who looked like an intellectual was selling half of a mirror on the street for an absurd price. The maid also brought a note which had a poem saying, “Both the mirror and the person were gone, and although the mirror has returned, the missing person has not come back yet.”
The two lovers met. One person was now the mistress of a powerful man of Sui and another was a vagabond with no status. But the general was a good man. After hearing the entire story of the couple, he released Jin Jong. Thus, the long anticipation and tears finally turned to joy.
People say, “The despair caused by divorce is comparable to broken mirrors unable to reunite, or to a fallen flower unable to go back to the stem.”
This is the origin of the word “broken mirrors,” which refers to the turmoil of divorce. Yet the broken mirrors originally meant a happy ending, as above. For couples who are thinking about separating, I hope they think about the affection and the destiny that led them to first meet from the story of broken mirrors.