Life, death and royalty in the petals of a flower

Life, death and royalty in the petals of a flower 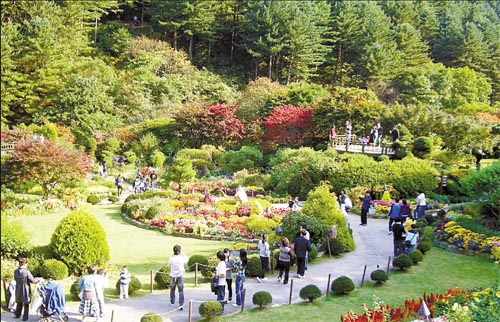 Families flock to the Garden of Morning Calm in the foothills of Chungnyeong Mountain for fall photographic opportunities.

I’m not sure if my grandmother loved flowers her whole life, but before she passed away she would visit my house from time to time with flower pots in her arms. Sometimes she brought lilies, on other occasions, chrysanthemums or daisies.
By contrast, my mother has never been a flower child in any sense of the term. Although she was a teenager during the late ’60s, she liked classical music, never wore a miniskirt and had an odd preference for trees over flowers.
Thus my family would always have some peculiar looking piece of bark lying around our living room.
Consequently I did a double take when my mother suggested a quick trip to the Garden of Morning Calm in the foothills of Chungnyeong Mountain, a two hour drive away from Seoul.
The garden was the love child of Han Sang-gyeong, a horticulture professor at Sahmyook University, and it opened in 1996 after three years of preparation.
Han found this spot in 1993 while walking with his students. He realized that what had once been a fertile landscape had been ruined by the slash-and-burn farming methods of the 1970s. He decided to reinvent the area as a garden.
It takes at least two hours for a full trip around the 330,580 square-meter garden, which has over 1,000 various plant species. There is an emphasis on Asian flowers, especially traditional Korean blooms like the Mugunghwa or Rose of Sharon.
The hillsides of the garden change color every few months according to the season.
During June it is deep in violet with irises, and in August the walkways are peppered with flecks of red, white, dark pink and purple Rose of Sharon petals.
Last weekend marked the last days of the garden’s chrysanthemum festival and natural white chrysanthemums, along with hybrid yellow chrysanthemums, were abundant.
It’s striking how flowers are often seen as a symbol, but what they represent varies widely between cultures. For example, chrysanthemums are symbolic of life in the West, of death in Korea and of death and royalty in Japan.
I remember a rather cynical girlfriend of mine complaining every time a guy gave her flowers. “Flowers are basically the genitalia of plants,” she said. “It feels weird to be giving and receiving genitalia for celebratory occasions.”
Nonetheless, as I walked through the bushes, looking over the winding pathways drenched in the saturated browns, mustard yellows and magenta hues of fall, I couldn’t help but imagining myself as Mary from “The Secret Garden.” It made me wonder how I ever became friends with my oh-so-cynical chum.
After an hour or so of walking through five of the 13 gardens including the wildflower and orchid gardens, my mother and I stopped at the traditional tea house near the Korean garden and ordered hot jujube tea.
“Hey mom, why a flower garden all of a sudden?” I asked.

The Korean garden. By Cho Jae-eun

“You know how your grandma would come to our house with flowers in pots and I would neglect them and they would die after a few weeks?” she laughed. “Well, I remembered recently how she used to say one tends to be drawn to beautiful and colorful things the older one gets, and I suddenly missed her.”
It made sense that my grandmother, as her life drew to a close, gravitated toward something that screamed life, their pert shapes, pleasing fragrance and vivid colors acting as an antidote to the hospital odors and sharp needles she would encounter every morning.
There were a lot of visitors that day, all with cameras on hand. There were so many camera flashes that at one point, it was as though I was at a red carpet event. Couples and families took snapshots of themselves surrounded by the autumn flowers.
Seeing their collective enthusiasm was like witnessing a group attempt to secure a visually delicious moment so that when they returned to their respective routines on Monday, the memory of that finite moment of beauty might cheer them up somehow. I wonder if that was how my grandmother once felt.
Opening hours are from 8 a.m. to 9 p.m. from April to October and 9 a.m. to 7 p.m. from November. to March. The garden is open seven days a week. Admission ranges from 2,000 won to 8,000 won. To get there by public transportation, take a train or bus from Cheongryangni Station in Seoul and get off at Cheongpyung Bus Station and walk for 10 minutes. For more information, call (02) 1544-6703 or visit http://morningcalm.co.kr. 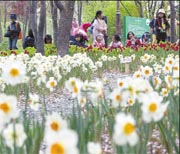 A place to see flowers eat bugs
Hantaek Botanical Garden
Located in Yongin, Gyeonggi, the Hantaek Botanical Garden is one of the biggest in Korea, with over 8,300 kinds of plants and flowers over a 661,160 square-meter area.
The garden has been featured in numerous television and film productions including the MBC show “Gung,” a period soap opera.
Hantaek was opened to the public four years ago. It consists of 33 gardens including an herb garden, an insect-eating plants garden and special gardens for spring.
Hantaek also holds seasonal festivals and events.
Until November it will feature ecology classes and a related exhibition for families with children.
The garden is open from 9 a.m. to 5:30 p.m. seven days a week.
Admission ranges from 3,000 won to 8,500 won.
To get there by public transportation, take a bus to Baekam from Nambu Bus Terminal and get off at the Hantaek Botanical Garden stop. For more information, call (031) 333-3558 or visit www.hantaek .co.kr 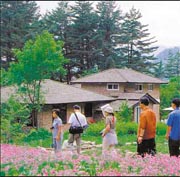 A garden with a nationalistic scent
Korea Botanic Garden
The Korea Botanic Garden, located in Pyeongchang, Gangwon, was opened to the public in 1999 by Kim Chang-ryeol.
Kim had spent 20 years cultivating edelweiss on his farm as well as studying plants and flowers that were on the verge of extinction.
When Kim opened his garden to the public he expanded his collection to including rare flowering plants and trees, especially spring varieties like Korean maple trees and cinquefoil. The garden prides itself on exhibiting only traditional Korean flowers and plants. It also holds exhibitions and interactive events.
The garden is open seven days a week from 9 a.m. to 6 p.m. Admission ranges from 1,500 won to 3,000 won. From Seoul, take a bus from the Dong Seoul Bus Terminal and get off at Jinbu Bus Terminal. Then take another bus from the terminal or walk 20 minutes to the garden. For more information, call (033) 332-7069 or visit www.kbotanic.co.kr. 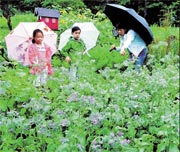 Farm Herbnara is all about herbs and their uses. [JoongAng Ilbo]

Rosemary is for remembrance and lamb
Herbnara
Located in Bongpyeong, Gangwon Province, Farm Herbnara opened in 1995. The farm displays 100 different kinds of herbs including peppermint, lavender, rosemary and feverfew. Each herb is identified with its botanical name, origin and medical use.
In the farm’s garden, visitors learn about the history of herbs. A one-day pass costs 5,000 won for adults and 3,000 won for children and the garden is open seven days a week from 8:30 a.m. to 8 p.m.
Birch House is the farm’s family restaurant, which offers homemade herb dishes. Menus include fried herb pork, herb rice, steamed herb chicken and herb tea. Dishes range from 7,000 won to 60,000 won.
The herb gallery, called the Aroma Fountain, displays the history of worldwide herbs. An overnight stay at the farm costs between 80,000 won to 300,000 won.
To get to Farm Herbnara, take the bus from Dongseoul Express Bus Terminal (Gangbyeon Station, line No. 2) that goes to Jangpyeong Terminal. Buses leave every 20 minutes. For more information, call (033) 335-2902 or visit www.herbnara.com.