[Books in brief]Thoughts in deep water

[Books in brief]Thoughts in deep water 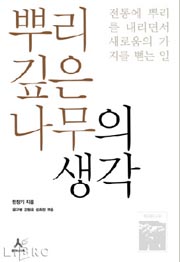 Thoughts of a Tree with a Deep Root

Once there lived a conservative man. His friends gave him binoculars so he could “widen his vision” and stop being so obsessed with trivia, such as correcting the spelling and usage of words in everyday language.
The man was unmoved. “There are too many great leaders in our country and too few great secretaries,” he wrote. “I am thrilled whenever I meet people who want to be a secretary like me.”
This is an excerpt from Han Chang-gi’s recently-published book, “Thoughts of a Tree with a Deep Root.”
Han (1936-1997) was the renowned publisher of the Korea Britannica and several noted documentary magazines.
The monthly magazine he published, also called Thoughts of a Tree with a Deep Root focused on the proper usages of the Korean language.
His other magazine, Thoughts of Deep Water, examined traditions and customs that were rarely dealt with by other Korean publishers.
This book explores Han’s long interest in language and modern developments in Korea.
His ideas might seem old-fashioned, but the book is true to Han’s philosophy ― he used to say that the true route to modernity is found in tradition.
By Paik Il-hyeon