The post-dated promissory notes of love

The post-dated promissory notes of love 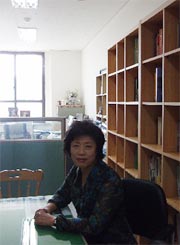 Minn Kyung-sook, the author of “Doris Lessing: A Portrait of 20th Century Woman.” Provided by the publisher

Doris Lessing, the winner of this year’s Nobel Prize in Literature, was not well known in Korea. However, along with a limited number of translations, there is “Doris Lessing: A Portrait of a 20th Century Woman,” a collection of critical essays on Lessing’s works by Minn Kyung-sook, a professor of English Literature at Yongin University. The IHT-JoongAng Daily recently interviwed Ms. Minn to discuss Lessing’s work.

Q.In what ways do you think Lessing’s work captures the essence of the 20th century woman?
A.In literature, the first half of the 20th century is noted as an age of violence represented by two great world wars. It was also an age of conflict between the left and right and between races. The 60s and 70s were the age of the civil rights movement, which sought equality for all regardless of their religion, color or gender. It was an age of social activism including the anti-war and environmental movements. Lessing examined all these issues in her work.

Lessing’s works are not well known in Korea. Most translations of her books are out of print. Why do you think her works are so disregarded here?
Her works are generally considered a difficult read. “The Grass is Singing” and “Martha Quest” were translated, but they sold poorly. “The Golden Notebook” sold even less, probably because of its complicated plot and technique. Her works often deal with nervous breakdown and schizophrenia, with Sufism and unorthodox psychoanalysis used as treatment. Later she also became interested in fantasy and science fiction. Since then, traditional readers and critics have criticized her novels for being too theoretical. 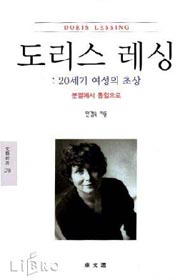 You make frequent reference to Lessing’s work exploring trauma, war and political “isms.” How important are these issues in her novels?
She grew up in Southern Rhodesia, now Zimbabwe. She was a child of the colonizer, the white Europeans, who were exploiting the colonized, the black Africans.
She struggled with her culpability and resistance against her parents and her mother country, England.
In the meantime she became a communist, a divorced woman, an undutiful daughter, and a mother who abandoned her children. She suffered a nervous breakdown and schizophrenia.
However, she tried to see the divisions in her own mind in relation to the way the world was being split between ideologies, races, men and women, the old and the young, using Gustav Jung’s theory of the collective unconscious. She believed that we could solve the problem by integrating our split selves.
Lessing is regarded as a member of the earlier generation of feminists. What do you see as some of her central arguments about women and female experience?
It is well-known that Doris Lessing did not like to be called a feminist.
She was concerned about all the oppressed including Africans, Jews, women, outsiders such as mental patients and homosexuals, the young abandoned by their families and so on.
Nevertheless, her novels, in which she rejected motherhood as a fetter men imposed on women, shocked and inspired feminists.
In “A Proper Marriage” (1954), where she described her childbirth experience in detail, she criticized the delivery process for being performed for the convenience of male doctors, not the welfare of mothers. She described the difficulty of childcare so frankly and straightforwardly for the first time that it drew worldwide attention.

Do you identify with Lessing’s work?
“Doris Lessing: A Portrait of the 20th Century Woman” (2004) is a collection of articles I wrote over more than 10 years.
I read her first work, “The Grass is Singing” in 1993 and proceeded to read “The Children of Violence” series.
This five-book series was very impressive, because she was still experimenting, not only by trying new subject matter, literary techniques and novel forms, but also by exploring new literary genres such as fantasy and science fiction. I was excited to be finding a new topic, a new idea, or a new technique.
Doris Lessing hated her mother and abandoned her two children when they were still young. Though she did not admit to misbehaving, I think that she could not forgive herself. She repeatedly wrote about them in her work, sometimes defending herself and sometimes blaming herself. In “The Four-Gated City,” the last work in “The Children of Violence” series, she writes “And so it is in this remarkable traffic between parents and children that there are, as it were, a whole series of post-dated promissory notes in the currency of a contained and patient love that come due one after another when one least expects them.” Perhaps that statement is her final judgment, and I think it can be applied to every relationship.