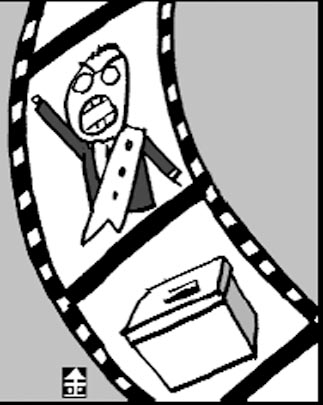 The film “All The King’s Men” by director Robert Rossen is a classic political film. Based on the novel by Robert Penn Warren, the movie was critically acclaimed by many.
Movie critic Patricia King Hanson called it the most remarkable political film of the age.
Hollywood movies have become political statements. Recently, “All the President’s Men” was remade with Sean Penn and Jude Law. In it, reporters help bring down the Nixon administration after Watergate.
Rossen had a trouble in the of McCarthism craze. He was blacklisted for refusing to cooperate with the House Un-American Activities Committee.
He could go back to the filming only after admitting his history of being a communist and confessing the names of his accomplice.
So on top of his original leftist sentiment, disgust of the real politics was reflected on the screen.
All The King’s Men describes a portrait of a reformist politician, Willie Stark, from the eye of a reporter.
Willie was an idealist elected governor from a humble background as a rank-and-file official. But in the course of time his idealism wavers and he becomes drastically corrupt.
The self-proclaimed country man shouts at the politicians who are on the side of the rich. His election campaign, which targeted marginalized people, hit the bullseye for its electrifying and emotional aspects similar to a religious fever. The media spotlights him as a charismatic leader against the established power of elite politicians.
After being elected, however, his reform plans soon crumble. Now that tax bombs are created for the welfare of low-income residents, critics fire back that the governor is squandering the state government’s budget.
What’s more, as the conservatives plan to impeach him, Willie counters with Machiavellian political machinations. Although corruption scandals linked to Willie are released, he takes pride that his corruption is no bigger than their corruption.
The conservatives demand him to stop populist provocations, but in the meantime they ally with Willie for their interests.
The movie intriguingly resembles our reality. It even looks like the textbook of political plotting.
It is indeed a season for politics and presidential elections.
Surely the unconditional apathy for politics cannot be an answer for us, though the movie leads us to that. Yet it is also true that we are not sure which candidate can gain the public trust.