A feast of thunder for headbangers

A feast of thunder for headbangers 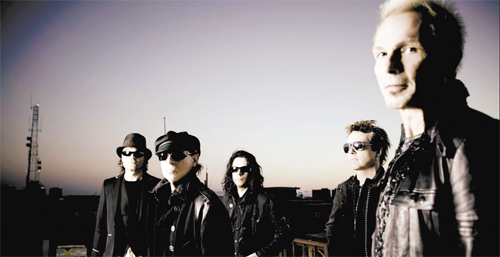 German hard rock band Scorpions will perform this Friday in Seoul, and then in Busan on Sunday. Provided by SonyBMG

If you know that Scorpions with the upper case ‘S’ aren’t the stinging kind, and that Megadeth is not a typo, you’re probably a hopeless headbanger. And you will love this weekend.
Veteran German rockers Scorpions will perform this Friday at 8 p.m. at Jamsil Gymnasium in southern Seoul, and then travel down to Busan for a Saturday show at 7 p.m. at Kyungsung University. The American metal unit Megadeth will follow at 6:30 p.m. Sunday at Olympic Hall at Olympic Park, eastern Seoul.
Though they play different styles of rock ― Scorpions’ brand of hard rock is infinitely more approachable than Megadeth’s thrash metal ― they do have one thing in common: they’ve both returned to their respective roots with their records in 2007.
Scorpions has long been one of the most popular rock bands in Korea, and their ballads “Wind of Change,” “Always Somewhere,” and “Holiday,” and the rock anthem “Rock You Like a Hurricane” remain radio staples here. Scorpions last performed in Korea in 2001.
The Korean stop is part of Scorpion world tour promoting their 2007 release “Humanity-Hour 1.” Korea is the only Asian destination for the German quintet.
Issued after a three-year hiatus since “Unbreakable,” Humanity-Hour 1 is an ambitious concept album about a civil war between humans and robots.
“Unbreakable” was the band’s return to their hard-rock roots, and was its heaviest album since 1993’s “Face the Heat,” and Humanity is an extension of the movement, albeit with a progressive rock touch.
Humanity, the band’s 21st release, strikes a rare balance between hokey pop rock and 80s-style guitar-oriented hard rock.
Scorpions released “Lonesome Crow,” their first album, in 1972 and Klaus Meine (vocals) and Rudolf Schenker (guitar), the band’s 59-year-old frontmen, have been the foundation of the group since.
Tickets range from 35,000 won ($38.22) to 135,000 won. For more information, call (02) 575-2121.
If you feel Scorpions are just a bunch of old geezers and long for heavier music, Megadeth should meet your needs.
Megadeth pioneered American thrash metal in the early 80s.
And after a series of ups (six straight platinum records and seven consecutive Grammy nominations in the Best Metal Performance category) and downs (members’ drug and alcohol abuse, and disbanding in 2002 following nerve damage to leader Dave Mustaine’s left arm), the quartet is alive and kicking again.
Other than the founder Mustaine, Megadeth has had 18 members. Playing in Seoul will be Mustaine vocals and rhythm guitar, Glen Drover at lead guitar, his brother Shawn at drums, and James LoMenzo at bass. This will be the band’s third show in Korea, after performing in 1998 and 2000.
Megadeth is often mentioned alongside Metallica, Slayer and Anthrax as the “Big Four” in the American thrash metal scene, but none has had quite the dramatic history as Megadeth.
Mustaine was let go by Metallica in 1983 because of his alcohol and drug abuse, and brought the problems with him when he formed Megadeth.
Over the next two decades or so, Mustaine fell in and out of his habit, and the low point came in January 2002, when Mustaine had a relapse while undergoing hospital treatment.
He checked himself into a rehab center, where he suffered a damaged nerve in his left arm after falling asleep on it over the back of a chair.
The injury forced Megadeth to disband in April that year, but after Mustaine’s recovery, the comeback record “The System Has Failed” was issued in September 2004 to rave reviews and commercial success.
The 2007 album “United Abominations” is the second since the band’s reunion, and a continuation of the band’s return to its thrash-metal roots.
The politically-charged record (the title is a play on United Nations, and the cover features the UN building being destroyed) debuted at No. 8 on Billboard, Megadeth’s highest rank in 13 years.
Those seeking Megadeth’s Korean connection might note that Mustaine, 46, holds a black belt in Korean marital art taekwondo.
In a recent interview with a local paper, Mustaine acknowledged that taekwondo helps him both mentally and physically, and that it is his source of self-confidence.
Tickets for Megadeth range from 66,000 won to 88,000 won. For more information, call 1544-1555.