An ancient art under attack by modern forces

An ancient art under attack by modern forces 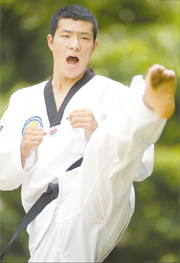 A taekwondo practitioner demonstrates the techniques and patterns of the martial art. [JoongAng Ilbo]

Aside from kimchi and hanbok, one of the many images that represents Korea is taekwondo, the internationally acclaimed Korean martial art that has found a home in the Olympics.
Taekwondo is one of the nation’s proudest cultural assets and is deeply rooted in the daily lives of many Koreans it is thus difficult to separate the practice from contemporary Korean culture. The number of children filling neighborhood taekwondo classes after school is a prime example.
However, taekwondo is not alone among Korean martial arts.
While other martial arts in Korea don’t enjoy the international reputations of their Japanese or Chinese counterparts, they nevertheless play a significant role in both the country’s past and present.
“Koreans trained in traditional martial arts to protect the country,” said Lee Si-jong, a United New Democratic Party lawmaker and former mayor of Chungju. Lee helped establish the Chungju World Martial Arts Festival hosted every year in North Chungcheong. The international martial arts festival celebrated its 10th anniversary last month.
“Drawings of martial arts training that look very similar to today’s taekkyeon can be found in wall paintings dating back to the Goguryeo Kingdom,” Lee added. “Martial arts embody the spirit and culture of a nation, especially when its purpose is as noble as protecting one’s own country.
“Therefore it is important to treat martial art as a remnant of traditional culture rather than an art of war,” he said.
The current status of Korean martial arts is sad, Lee said.
Despite numerous dojang, or martial arts schools, around the country, many young people shy away from mastering the skills as professionals. “Today’s sports, such as archery, are martial arts imported from the Western world,” Lee said. “But Western sports have the Olympics, an international tournament, and therefore a lot of supporting organizations, systematic training and government funding. Korean martial arts, on the other hand, are neglected.”
Many young people, according to the lawmaker, depart from Korean martial arts because their future is uncertain. Young people, he said, think they can only secure their future of getting into college and landing a job by taking up Western sports. Lee said he introduced legislation in 2004 that would promote the preservation of Korean martial arts. However, it sits untouched at the National Assembly to this day. 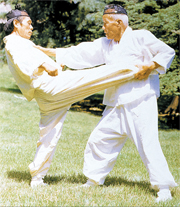 Taekkyeon, one of the Korean traditional martial arts. [JoongAng Ilbo]

“We need to have faith that their future is secure,” he said. “But there is no government budget or support.”
The first step Lee and others have taken is to hold a national martial arts competition. Some 2,500 martial arts athletes and 500 masters and judges nationwide participated in the trial event held last month.
“Like in Western sports, athletes competed against one another, and we gave the winners gold, silver and bronze medals,” Lee said.
While Lee tries to get the government to fund future events, he hopes to take the competition to the next level as a “martial arts Olympics.”
In Asia, three nations are most commonly known for their martial arts: China, Japan and Korea.
“The difference between the three,” said Huh Geon-shik, director of Mooto Research Center, “is Japan’s emphasis on form and repetition.”
Huh said Japanese martial art relies heavily on influences of Zen Buddhism and kendo, or Japanese fencing.
“Japanese martial arts, including judo, aikido or karate, are based on kendo, or attacking and defending with swords,” Huh said. “The hands become the sword.”
The use of armor differentiates the various Japanese martial arts.
For example, judo is designed for combat while wearing armor, while practitioners of karate do not use armor.
Chinese martial arts are more flamboyant in style and include more variety, Huh said.
Korean martial arts, according to Huh, are flexible and distanced from rigid forms, which allows for impromptu movements.
Interestingly, Koreans martial arts weapons mostly consist of farming tools.
The three countries’ surviving martial arts took shape after gunpowder began to be used in weapons.
“The Japanese no longer needed to shoot arrows or attack enemies with their bare hands,” Huh said.
“That is why the Japanese started to emphasize marital arts in the form of kata [set movements as exercise],” Huh said. “Chinese martial arts transformed into health-oriented exercises like tai chi.”
In the case of Korea, after the Japanese attack on the Joseon Dynasty in the 1700s, Korean scholars collected information on the martial arts of Korea, China and Japan.
Unfortunately, information on most of the traditional Korean martial arts was lost during the Japanese colonial period.
“Japanese martial arts such as judo and kendo were incorporated into school curriculums [in Korea],” Huh said.
This continued even after Korea established its independence. The martial arts taught in the Joseon Dynasty’s royal court were imported from China.
Only in the 1960s did Korean marital arts find their way into dominant culture.
However, there is no systematic data on how many forms of martial arts are traditionally based or were created in modern years.
The Internet Web site Wikipedia lists numerous traditional Korean martial arts, including charyok, kwansunmu and taekkyeon. The list of modern martial arts includes kumsul, kwonbup and gongkwon yusul.
Currently, three martial arts in Korea boast a historical background. Practitioners of some others claim a long historical tradition. Still others developed in the modern era after the Japanese colonial period.
These include taekkyeon, ssireum and hoheupbyeop (literally translated as “ways of breathing”), Huh said.
Among these, taekkyeon is considered the representative traditional martial art.
The Korean government designated taekkyeon an intangible cultural assets on June 1, 1983.
Taekkyeon is a barehand combat technique which relies heavily on use of the legs. It is also known as gakhee.
Instead of utilizing striking blows and kicks like karate, taekkyeon takes advantage of an opponent’s blind spots. Thus, those who practice this art can kick or throw their opponents down to the ground before an attack even registers.
This form’s style is very different from taekwondo, which uses direct actions. Taekkyeon is very flexible and those who practice it appear to taunt their opponents by prancing around them with light footsteps that closely resemble a dance. These movements are smooth and elastic.
The martial art is believed to have originated from subak, a lost martial art with roots in the Goguryeo Dynasty.
Taekwondo, according to Huh, is a combination of different martial arts, including those native to Korea, Chinese and Japan.
“This shows the absorbable and flexible qualities of Korean martial arts,” Huh said.
Taekwondo is relatively new although some say that the martial art can be traced back to the Goguryeo Dynasty.
The taekwondo that we know today only took shape in the 1950s after the end of the Korean War. Like taekkyeon, taekwondo is based on kicks. However, its movements are more straightforward and powerful.
Ssireum, Huh said, used to be more prevalent as a martial art.
“The rules [in the past] were less restrictive than what we see today,” he said.
“While practitioners of the modern form of ssireum could only throw the opponent down on the ground, in the past, opponents could be pushed out of a ring, very similar to today’s sumo.”
Today, ssireum is a sport in which athletes compete to show their strength.
Despite their rich history, many of these traditional marital arts are dying out, Lee said.
“To preserve such marital arts is to preserve our traditional culture.”