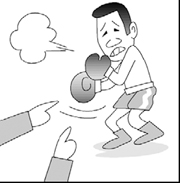 The original meaning of the French word “etiquette” is label. It was a kind of entrance pass for visitors to the royal court in earlier days. It later denoted manners of the court and added the meaning “attitude and behavior one needs to observe while living in society.” It was in the 19th-century Meiji Period when the concept of etiquette was introduced in Japan. The Meiji government added Western etiquette to the traditional manners that were handed down from the Muromachi Period.
The Japanese are famous for their strict and unique manners. Before pressing the bell at the door of a home where one is invited, he must take off his coat and gloves in the winter. This is to make the hosts comfortable and not worry that they have invited someone in cold weather. It is the opposite of Western etiquette where you take off your coat indoors. In Japanese homes, where most have sliding doors made of paper, one should cough slightly rather than knock on the door to show consideration for people who might be inside the room. In an elevator, the person who got in first is in charge of pressing the buttons and opening the doors. It is good manners for the person closest to the buttons to press the button and keep the door open until the last person gets off. Manners education for children is more strict. If a child asks for something impossible in a public place, the parent takes him aside and points out what he has done wrong. Parents do not yell at children or get angry with them, but instead tell them off quietly in a firm voice. This is to make children realize what they have done wrong rather than shame them. Although parents allow children to behave like spoiled brats at home, they won’t tolerate this kind of behavior outside since it could cause other people trouble. Public education starts with manners education.
In Japan, manners are a big issue. A famous boxer named Kameda fought dirty, poking an opponent in the eyes and picking him up and slamming him to the canvas while he was down in a recent WBC title match. His father had taught him to hit an opponent’s vital spot. The three Kameda brothers, all teenage boxers, spoke in unkind and foul language with other people. The father incited this behavior, saying “It is the Kameda style.” When the three Kameda brothers were on a roll, the Japanese media could not say anything, but after losing and being suspended due to the ring incident, the media jumped on them, saying, “The parent’s manners education had been wrong from the beginning.” This incident makes one realize that in Japan, you must be strict with manners or must have unsurpassed talent, so no one can say anything about it.