Governor of a place he cannot even visit

Governor of a place he cannot even visit 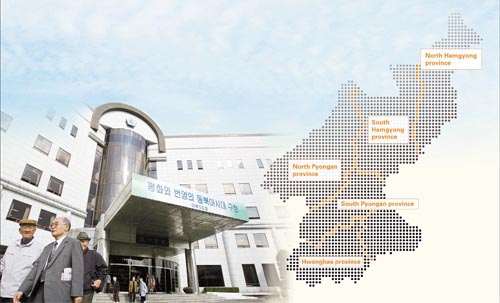 Kim Chong is a citizen of South Korea and the governor of a North Korean province. Every weekday, Kim’s chauffeur picks him up in a black sedan and he glides to his office in Gugi-dong, central Seoul.
There he sits at his desk behind a lacquered nameplate that defines him as the governor of South Hamgyong Province, from which he is separated by several hundred miles and a fortified border. Despite his fancy nameplate, Kim’s job is at odds with the conventional definition of a provincial governor.
For one thing, he can’t pick up the phone and order a new road to be built. He doesn’t even have the right to visit his provincial capital, which is in North Korean territory.
In fact, Governor Kim has not stepped foot in the area since 1950, when South Hamgyong’s Wonsan was his hometown before he fled south during the Korean War.
Kim, 71, is not the only person in this curious position. Kim is the head of the Commission for the Five Northern Korean Provinces, which consists of governors, city mayors and village leaders representing North Korean provinces and local areas.
Kim and his fellow governors have some 40 South Korean government officials working for them. Each province, city and village holds its own social gatherings of former North Koreans now living in the South, a group with 8 million members, according to the commission.
Due to the circumstances surrounding the two Koreas, Kim is a governor-without-sovereignty over South Hamgyong.
Ranked as a vice minister in the South Korean government, Kim and his fellow governors in absentia get an annual salary of tens of million won, chauffeurs and personal secretaries.
The governors are appointed by the president on the recommendation of the prime minister. President Roh Moo-hyun and his predecessor Kim Dae-jung, with their “Sunshine Policy” of engagement with the North, have been no exception.
The lack of anybody to actually govern does not mean that Kim spends each day doing nothing. He calls his job an “immense task” and part of the “preparations for unification.” He takes pride in his list of “achievements this year,” drafted by his personal secretary, which is seven pages long. Among the items on the list Kim fondly remembers his recital of the Robert Frost poem, “The Road Not Taken,” at a dinner with the South Korean home minister. He also keeps busy networking with others who fled the North at his favorite North Korean cold noodle restaurant. 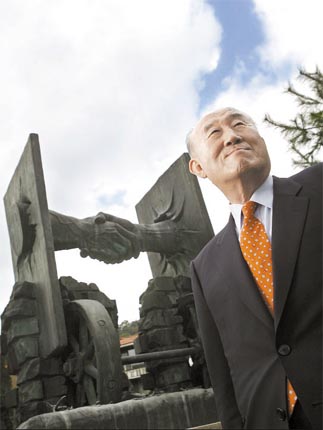 Kim Chong, the Seoul-based governor of the North Korean province of South Hamgyong. By Jeong Chi-ho

Most recently, Kim said he was proud to have held an annual sports meeting attended by Prime Minister Han Duck-soo, presidential contender Lee Myung-bak and some 20,000 participants who fled North Korea to find a new life in the South during and after the war. His ambitions include an expansion of budgets for the city mayors and village leaders of the northern regions, which are currently honorary posts without pay.
His spacious office in a building named the “Hall of Unification,” is decorated with framed photographs of Kim posing with the powerful, including President Roh Moo-hyun and members of the National Assembly.
His position was born from the unusual situation of the two Koreas, which are technically still at war because the 1950-53 Korean War concluded with a ceasefire, not a peace treaty.
The South Korean Constitution, created in 1948 after the birth of the two Koreas ― a pro-communist, pro-Soviet Union one in the North, led by Kim Il Sung, and a pro-American version in the south, led by Syngman Rhee ― stipulates that all parts of the Korean Peninsula, including North Korean provinces, are South Korean territory. Under the Constitution, the South Korean government established offices for the five provinces of North Korea ― North and South Hamgyong, North and South Pyongan and Hwanghae.
In 1962, under President Park Chung Hee, a special law was passed for the “administration of the five Northern provinces that have yet to be reclaimed.” Under the law, the Commission for the Five Northern Provinces was created. As part of the Ministry of Government Administration and Home Affairs, the commission receives funding from the South Korean treasury. This year, the commission received 6.7 billion won, which is expected to grow next year to 7.9 billion, according to Song Young-bae, the Home Ministry official in charge of public relations for the commission.
When President Kim Dae-jung began the Sunshine Policy, the commission became a source of controversy because its role included “instilling and promoting anti-communist ideas.” This anti-communist role was removed in 2005, during a revision of the special law governing the commission.
Some, however, believe that what was needed was not just revision but complete abolition. 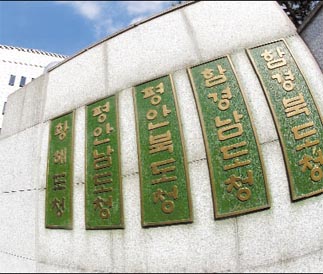 Outside the commission’s headquarters are the names of the five provinces in North Korean territory that are “yet to be reclaimed.” By Jeong Chi-ho

Kim Gwi-ok, a professor at Hansung University and an expert on inter-Korean affairs, has long called for the dismantlement of the commission. She views the commission as an “obstacle to peaceful unification” of the two Koreas.
“The commission had this problem from birth,” Kim said. “In the past the South Korean government was strictly anti-communist and established the commission thinking North Korea would collapse and be reclaimed by the South. This is an archaic way of thinking.”
What also bothers her is the conservative nature of the commission. “The commission has previously been vocal in its support of conservative presidential contenders with an anti-North Korean attitude,” she said. “As a government body it should be apolitical.”
Governor Kim is well aware of his critics and the thaw in relations with the reclusive communist regime. “I welcomed the inter-Korean meeting this month with open arms,” Kim stressed. He also noted that he asked Lee Myung-bak not to say anything political during his speech at the commission’s sports gathering.
“Our commission’s role now is to take care of North Korean defectors, create social interactions among the eight million people here of North Korean heritage and protect North Korean culture,” Kim said.
Some people, however, say that it is only natural for the commission to be anti-communist and anti-North Korea. “We are the people who fled the North and communism during the war,” said Cha In-tae, who served as the governor for South Pyongan until early this year. “We are not against the North Korean people, but we are repulsed by the regime.” Kim said he had a hard time controlling the controversy over the revision of the law in 2005, as many members were against the idea of removing the anti-communist clause.
Kim himself has his store of unpleasant memories. After Wonsan fell into the hands of Kim Il Sung’s communists, his friend, Kang Yu-ho, was killed by a car. The driver was a Communist Party official, who declared that Kang’s death was an “honorable one,” because the car was driven by a communist.
“That was just nonsense,” Kim said, with a frown. Shortly after, the Korean War broke out, and Kim decided to go to the South because he was disgusted by the communists.
Taking a boat from Heungnam Port, Kim landed in Mukho in the South, and he later met his family members who had also fled from the North.
After running a successful construction and leasing business Kim decided in the ’90s that he wanted to serve the North Korean community in the South. He ran for election as Wonsan city mayor among natives from Hamgyong province in the South and won the post. From there, he worked his way up to become head of the five provinces commission. “The commission for us is a precious nest where we can share memories about our hometowns,” Kim said.
Professor Kim said that she is aware of the significance of the commission but she still believes it should be abolished and reborn as a social organization with different sources of funding.

From top to bottom: An anti-communist rally organized by the Commission for the Five Northern Korean Provinces in the ’90s; the annual sports day of the commission; a singing troupe consisting of exiles from North Korea performing for the commission; President Roh Moo-hyun at a lunch for the commission. [JoongAng Ilbo]

Others disagree. An official at the Home Ministry, who has served with the commission in the past, said, “I am aware that a government-funded commission is questionable, but regardless of the controversy, I think the commission is necessary.” He added, “The members suffered the loss of their hometowns, and the government could do a little something for them.”
Regarding the controversy over the nature of the commission, he said, “We must keep the Constitution in mind and somebody connected with a government body should be in charge of the northern territories.”
Asked about calls to abolish the commission, the official said, “It’s like denying our own Constitution, therefore it’s a contradiction.”
Professor Kim, however, dismisses the idea, noting the fact that the two Koreas are now acknowledging each other and pursuing a peace treaty.
In the meantime, Kim is firmly against the idea of abolishing the commission. “There are lots of things for us to do,” he said.
Such as hanging out with his fellow North Korean natives in the South and dreaming of returning to Wonsan, which he describes as the Naples of the North.
“Doing the commission’s work is a way of remembering my beautiful hometown, where I cannot even go,” Kim said.