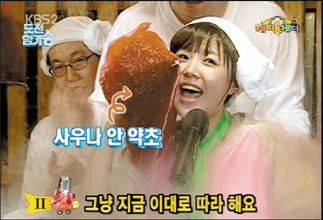 A scene from “Happy Together,” where celebrities have to sweat and sing. [KBS-TV]

I used to believe in the beautifying effects of the “jade sauna” at the public bathhouse in my neighborhood, but over time, it began to feel like a house of horrors. I’ve realized I am not cut out for enduring long hours in the steam room.
Once, on the verge of fainting, all I could do was admire the squad of middle-aged ladies who remained in the heat as I ran for the door.
Half an hour of steaming was nothing for the ladies, whose routine included slowly peeling and enjoying apples and drinking (and sometimes rubbing on their faces) fresh yogurt. They were celebrities at the bathhouse because of their indomitable enthusiasm for the sauna. A source in the sauna told me that they usually hang out there for three hours, with a few breaks in between.
Now I am older enough to be skeptical about the effects of the jade sauna, but I was suddenly reminded of the invincible women while watching, “Happy Together,” a KBS2-TV entertainment show, airing at 11 p.m. on Thursdays with a popular segment called “Challenge! Learning a Song by Heart.”
The show is a mixture of two cultures that Koreans enjoy ― the sauna and the noraebang, or singing room.
Set in a real-world sauna, with the temperature set at 60 degrees Celsius, the show keeps a group of celebrities in the steam for about two hours.
They are given the song of the day, A Korean classic with the lyrics changed to suit the day’s theme.
The only way to escape the sauna is to learn the song of the day and perform it without making a single error.
Korean TV has had its share of shows that try to entertain the viewers by tormenting the guests, and this segment is an orthodox heir to that tradition.
Watching the celebrities sweat and be harassed by the heat and their task provides a sadistic kind of fun to the viewers, myself included.
I feel bad now about the affliction suffered by the celebrities, but I have to admit that I chuckled so hard that I had tears in my eyes by the time the show ended.
To the discomfort of the celebrities on the show, memorizing the lyrics is not an easy task, as the theme is designed to give useful information to the viewers, such as public service phone numbers and health tips. In the heat and covered in sweat, the celebrities also have to deal with heckling from their fellow contestants who try to prevent them from escaping.
Last Thursday’s show had the celebrities poking the singers’ bottoms with plastic combs and masks. Some dressed themselves as Shrek in order to make others laugh and stop singing. Some of the celebrities are professional singers, and they try to cause cacophony to thwart other people’s escape.
Still, as time goes by, the celebrities reach their limit and their desire for escape grows so strong they can ignore any disturbance.
By the end of the show, the celebrities reach the point where they simply do not care how they look, with their makeup all streaked and their blue and pink sweatshirts soaked in sweat.
Once they escape, they are given the chance to dive into a pool of cold water, which they call heaven. Swimming through the pool in a public bathhouse, the escapees enjoy an ice cream and then stare into the sauna to torture the contestants left inside.
After having a good laugh, I felt the prick of my conscience and was a little concerned about the bad effect the show might have on its cast.
No wonder a well-meaning medical doctor wrote a column in a newspaper to voice concern about the condition of M.C. Yoo Jae-seok’s skin.
At the same time, I am still obsessed with the song and the lyrics about the phone numbers to call in an emergency, which I am humming everywhere I go. Also, I am intrigued enough to go back to the sauna to see if the invincible ladies have survived and are still enjoying their apples and yogurt.