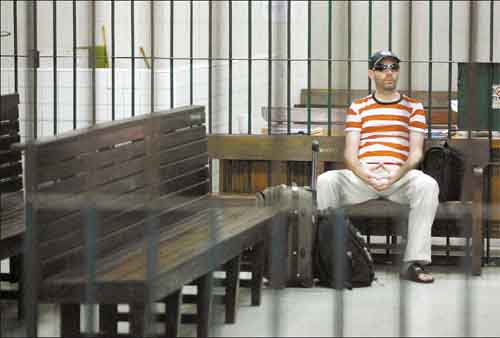 Suspected Canadian pedophile Christopher Paul Neil, who was an English teacher at schools in Korea, waits inside a Bangkok Criminal Court detention cell on Oct. 20. [REUTERS]

Christopher Paul Neil, a Canadian English teacher, was arrested last Friday after an intensive manhunt in Thailand.
He had been wanted by Interpol for molesting more than a dozen boys and posting pictures of the assaults on the Internet.
Before he became an international fugitive by fleeing Seoul on Oct. 11, he had been teaching at Kwangju Foreign School in Korea. School authorities say they had no idea about the man’s dark past.
Revelations about Neil’s alleged pedophilia have thrown up a long list of questions about the procedures used to screen foreign English teachers. Many recruiters and agents for both private and public schools say that the screening procedures used when hiring foreign teachers tend to be too haphazard.
From 2002 to 2004, Neil, a former seminarian who was a youth counselor and substitute teacher in Canada, allegedly abused 12 Cambodian and Vietnamese boys aged from six to their early teens.
“We checked his background to the extent that we could,” said an administrative secretary at the Kwangju Foreign School who processed Neil’s documents in August. “We received his resume by e-mail and passed his sealed university transcript, a copy of his passport and a teaching certificate to the immigration office like we had with 16 other foreign teachers at the school. If a criminal check becomes an issue, it should’ve been done by the immigration office when they issued his visa, not by the school.”
But even if the school had checked, it would not have helped them uncover Neil’s past. Until Interpol made its appeal earlier this month, Neil’s record would have come up clean. He had no convictions and no outstanding warrants.
Last year, the Seoul Immigration Office charged 143 foreign nationals holding E-2 visas, which allows foreigners to teach in Korea, with violations of local immigration law. Common offenses include holding false university degrees and working at unauthorized locations. Background checks have become problematic because there are too many schools looking for native English speakers who are eligible for a teacher’s visa and not enough qualified candidates. The situation worsened when China became a major rival in the market for native English-speaking teachers.
“The industry is in desperate need of native English-speaking teachers,” says Ham Dong Hyun, a coordinator for GMSC-Recruiting, who is responsible for hiring English teachers to work in Korean schools. “Too many schools want North American teachers, but there are a limited number of people who can teach. So the industry ends up taking teachers who are unqualified.”
Others explain that the almost rabid demand for English language skills among many Korean parents forces schools to compete for the limited number of Western teachers, forcing some hagwon or cram schools to hire poor- quality staff. 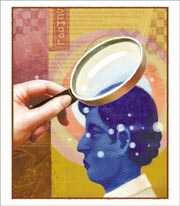 “You see parents chasing after Western teachers in school playgrounds just to have a quick chat or invite them over to dinner so their kids can have a free English session,” says Sarah Yang, the director of ELI Academy in Incheon. “It’s really creating an unnatural situation in the industry. English schools have become a major business investment for many owners and school directors who have no experience in the education field whatsoever.”
Directors and recruiters often contact the past employers of potential candidates using the details given on resumes, but many schools skip this process.
As a result, contractual disputes between teachers and employers have become routine at many Korean hagwon. Schools have been caught hiring people who do not have a university degree, a requirement for an E-2, and asking them to work on a tourist visa.
Smaller schools in rural towns across Korea frequently given no thought at all to verifying the candidates’ credentials. They are simpy relieved to have found candidates willing to live outside a big city.
Last year about 16,000 foreign nationals obtained an E-2 visa. That figure represents a 43.7 percent increase over 2003.
Adam Tacey, an American who teaches English at a kindergarten in Busan, began his job search by mailing his resume to a bunch of agencies and recruiters. None of them, he says, made an effort to run a background check.
“They [recruiter] called me with various jobs,” he says. “I asked some questions, did some phone interviews and picked one that sounded okay. I then mailed my documents to Korea. I think they mostly wanted to make sure I was comfortable working with kids.”
Tacey mailed his university diploma with sealed transcripts, a signed copy of his contract, his passport and his photos to the recruiter. Within a month, he was in Korea.
To accommodate the rising demand for native English-speaking teachers, some recruiters feel that the current conditions for the E-2 visa need to be eased.
Currently, in order to teach English in Korea, you must be a foreign national and university graduate from countries where English is an official language.
That narrows the market to six countries: the United States, Canada, United Kingdom, Australia, New Zealand, and South Africa. The current law, some recruiters say, prevents many proficient English speakers in countries like Singapore or the Philippines from applying for a teacher’s visa.
To filter out unsuitable candidates, recruiters advise schools to request a criminal background check on the teachers.
The Korea Foreign Teacher Recruiting Association, a watchdog that seeks to improve the quality of English teachers in Korea, has compiled a blacklist. Since 2006, 86 foreign teachers have been placed on the list ― needless to say Neil was not one of them.
The teachers who have been listed are those reported for heavy drinking, sexual indecency and contract violations, such as one Debra Wilkinson, an American who allegedly fled with an airline ticket after signing a contract to work at an English academy here last year. Robert Kim, that school’s principal, thought of filing a lawsuit against Wilkinson, but he dropped the idea due to the high cost of litigation. 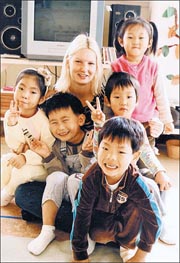 Sarah Fauset taught English in Korea and now lives in Canada where she recruits foreign teachers. She says background checks are important but that student safety is a school’s responsibility. Provided by Sarah Fauset

“The list was made up for future reference,” says Goh Jae-yong, the association’s spokesman. “They [the named instructors] are probably still teaching somewhere in Korea.”
Recruiters who are responsible for bringing English teachers to Korea warn that certain risks are inevitable, no matter how carefully they check. And to protect students from the dangers of being taught by a criminal, they advise schools to prepare their own criteria for selecting suitable staff and to make careful judgments.
The ELI Academy in Incheon followed this advice. The school trains all its male employees, both Korean and foreign, to avoid physical contact with the students.
Others rely on common sense and communication. To reduce the risk of hiring teachers with a bad history some schools search for replacements based on recommendations from teachers who had worked at their school.
“Checking criminal records isn’t a must,” said Kim Yun-kyung, the human resources manager at Yes Youngdo English School, where all teachers are foreign nationals. “We can get a good sense of a candidate’s temperament after an hour-long phone interview.”
But even then, checking doesn’t necessarily stop schools from hiring somebody like Neil.
“Unfortunately candidates can only be screened on items like their education and employment history,” says Sarah Fauset, the owner of “ESL Teacher Recruiter” based in Canada. “A spotless criminal record does not mean the candidate has never committed a crime or will never do so in the future. Often these situations are unpredictable and can only be dealt with when a problem arises. Recruiters are responsible for finding candidates with a suitable education and employment background, but the safety and security of the student is the school’s responsibility.”
In the end, the blame often falls on the government, which is more likely to have access to a candidate’s criminal history when it issues a visa.
But a government official explains that there is no cross-national network to verify the criminal records of foreign nationals before issuing their visas. Most countries, including Korea, are extremely careful about sharing their citizens’ personal information, including their criminal records.
“It’s a serious issue for us to consider,” says Kim Yeong-geun, a spokesman for the Seoul Immigration Office. “Are we prepared to release the criminal record of our nationals to other countries to use against that person when they seek employment? Certainly not, unless there is a serious crime involved. A state must protect the civil rights of its nationals. It is against the Korean Constitution to use a person’s criminal record against him when he seeks employment. Why should any country make personal information about their citizens readily available to other countries for use without an adequate reason?”
Nevertheless, Korean parents have good reason to feel relatively unprotected.
The United States requires that those applying for a work permit obtain a statement of good conduct from the police in the country where they have lived for the previous six months. Even tiny St. Kitts in the Caribbean has this requirement.
Following Neil’s arrest, some say fear has grown out of proportion, and many foreign English teachers in Korea are feeling like scapegoats.
“I hope people don’t react too sensitively to Neil’s case,” says Sarah Yang, the director of ELI Academy. “You see serious sex crimes happening all the time among Korea’s elites, with professors, doctors and prosecutors all involved. In the end, this is not a situation that’s limited just to foreign English teachers.”