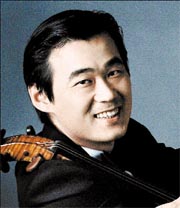 Cellist Yang Sung-won is building up his stamina for a marathon ― but not one of the running variety.
Instead, the musician is aiming to complete a marathon four-hour performance of Beethoven’s five cello and piano sonatas.
Yang recorded the sonatas for an album that he released early this month.
The musical journey is divided according to the periods of Beethoven’s life. The performance starts with an introductory talk hosted by Yoo Hyeong-jong, a renowned music columnist. He will explore Beethoven’s early life in relation to three of his sonatas.
Yang, along with French pianist Pascal Devoyon, winner of the Silver Medal at the 1978 Tchaikovsky Piano Competition, will perform three pieces in the first half. Then Yoo will tell stories of Beethoven’s later life, introducing two more sonatas. A 45-minute dinner break will serve as an intermission.
“Beethoven faced midlife hardships as he lost his auditory senses and economic support,” Yang wrote in a press release. “He emotionally wandered for two years, but in 1815 managed to compose two cello sonatas. Despite his setbacks, Yang wrote, Beethoven pursued a profound spiritual and artistic goal and composed works bursting with delicate emotions and transcendent spirit. As Beethoven persevered while composing the sonatas, Yang says he possessed similar endurance while preparing the performance.
When he first played Beethoven’s cello sonata 20 years ago, he found it hard to understand. But as time passed, Yang started to understand the composer’s sublime, young life. “I wanted to challenge myself and research more as a performer,” Yang said.
“It will be the first time ever in Korea that an artist will perform Beethoven’s cello and piano sonatas in one day,” Jean Kim, the PR manager of LG Arts Center, said. “Both audiences and performers will be able to relate to Beethoven’s musical life.”