A generation that’s ready to abandon its dreams

A generation that’s ready to abandon its dreams 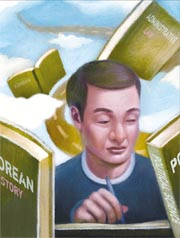 Like many Koreans of his generation, Lee Dong-sup, who is now in his 50s, grew up as a devastatingly poor country boy in post-war Korea and literally crawled his way to success.
“The walk to my elementary school was more like an expedition,” Lee said. “The round trip took four hours because we couldn’t afford the bus ticket.
“My textbooks smelled like kimchi most of the time because we didn’t have Tupperware back then. We carried our kimchi and rice in cheap tins and the juice always leaked. Oh, how I would dream about having a fried egg every night before going to bed,” he said, chuckling.
The country boy, however, dreamed of more than just eggs. He wanted to see the world and make something of himself.
He moved to Seoul and enrolled in the economics department of a leading university. He then worked for a conglomerate for some 20 years, while making a comfortable living for his family.
Then came the financial crisis and Lee got laid off from his job in 1998 when he was in his mid-40s.
He has been starting small businesses ever since, but none of them provided the secure income of his pre-crisis salary.
“It’s O.K. though,” Lee said. “I’m doing well. At least I know that I’ll never be as poor as I was in my childhood.”
For his son, Lee Sun-jae, in his late 20s, the rags-to- riches success story of his father seems like a distant fairy tale. He is not interested in conglomerate riches or entrepreneurial gambles. He thirsts for security, the kind of rock-solid guarantee of employment that his father never attained.
Thus, after graduating from university two years ago, he joined thousands of other anxious Koreans in studying for the civil service examination.
“I have to admit I was quite shaken up when my father lost his conglomerate job overnight,” he said. “He worked so hard for that company. When I was little, I would whine because he was always working. I couldn’t believe how the company, which my father devoted his youth to, could be so cruel as to fire him without a second glance,” he said.
Lee Sun-jae isn’t the only young person in Korea who hungers for the lifelong job security of a civil service position.
This year’s data from the National Statistical Office shows that 36.9 percent (196,000) of job-seekers aged 15 to 29, are studying for the seventh or ninth grade civil service examination.
This makes government service the preferred career by a huge margin. A distant third, at 16.5 percent, is trying out for a public corporation.
Youth unemployment is now at its highest level since the late 1990s. As of last year unemployment among those aged 15 to 29 was 7.6 percent ― double the rate for the rest of the working population.
Fighting against these adverse social circumstances, Korea’s youths are being anything but reckless.
“After the monetary crisis, the concept of having a job for life, of devoting yourself to one company, no longer exists,” said Lee Gwang-suk, head of Incruit, a popular employment portal site. “With the country’s shaky economy and youth unemployment, young people want to be civil servants and have the guarantee of a job until they retire.”
Job loyalty has also become less of an issue for job hunters.
The days when people committed themselves to a single company, paying their dues and in return, getting a kind of second family are over.
It’s hard to believe that Samsung Electronics ran a campaign back in 1991 with the catchline “Coffee break at 3 a.m.” in which employees prided themselves on their long working hours.
National Statistical Office numbers show those aged 15 to 29 spent an average of 21 months in their first job.
Only 18 percent of them stayed at the same job for over three years.
In a book released this August titled “880,000-won Generation,” Park Gwon-il talks about the structural imbalances that have caused this phenomenon.
“In Korean society today, the self-made man can’t exist.” he said. “There is an imbalance between different generations. While many of the parents of people who are in their 20s today are self-made men, that generation made a social structure which can’t digest them anymore. As Korean society has stabilized, there are fewer opportunities for someone to recreate their life and become a success on the basis of sheer willpower.” 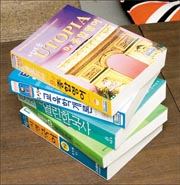 Not only is there less room for success, but for Jeon Hong-ju, 31, this structural imbalance has made him give up the thought of pursuing his life’s passion. Upon graduating, Jeon began work as a marketing manager for Ales Music, a small independent music label. In his home there are thousands of music CDs.
“Although the pay wasn’t very good, I loved working there,” he said. After almost two years at the label, Jeon quit. “The company was struggling to stay afloat. I couldn’t take it anymore. I was anxious about turning 30 and not having a secure job.”
Last year, he took the ninth grade level civil service examination and passed. He now works in a district office in Incheon. “I’m good at adjusting, so this job is fine,” he said with a faint laugh. “It’s a nine-to-six job. I don’t get paid much but at least I’m not worried about where my next paycheck will come from.”
The situation has been under scrutiny by politicians and the media. Young people who opt for the security of a civil service job are called gongsijok, or members of the public servants’ clan.
Presidential candidate Lee Myung-bak made a statement at a forum last month about the disillusioned youth of Korea.
“The fact that young Koreans prefer the security of a civil service job proves how generally insecure our economy is. However, I wish they wouldn’t give up their dreams so easily and not be so afraid of risk or change.”
Jeon thinks these kinds of public statements are irresponsible.
“For the past decade, the infrastructure has been getting worse and worse,” he said. “Korea before and after the IMF crisis are two different countries. Although we are better fed, we are more worldly and weary. Naturally we are concerned about having a roof over our heads and a decent meal when we are 60 or 70 years old. So what’s wrong with that?”
Jeon’s statement might sound cynical but recent statistics are far from the “dare to dream” scenario which the media, especially the conservative print media, try to create for Korea’s youth.
In a recent survey of 1,082 job hunters in their 20s conducted by Job Korea, a large employment portal site, 47.3 percent said that they have contemplated suicide because of the stress of finding a job.
Last week, a 25-year-old female, who graduated from a prestigious university in Seoul in 2006, committed suicide after failing the entrance exam for the pharmaceutical department at another university. She left a note saying, “I should have just studied for the civil service examination.” The police officer responsible for the case commented, “She wanted to go to the pharmaceutical department because it was hard for her to get a job after graduating from the humanities department.” 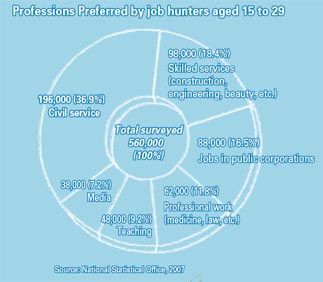 Jeon has also thought about transferring to another department which has a higher percentage of employment among graduates. “I am a social science major so there is a limit to what I can apply for,” he said as he laughed. “I couldn’t apply, for example, to the marketing department at a big conglomerate. I seriously thought of trying to get into the kimchi department of some university, so at least I would have a skill.”
As Lee Dong-sup watches his son study hard for the upcoming civil service examination, he feels guilty. “He used to be very good at art. I feel so guilty that my generation couldn’t provide a better environment for my son and his friends. And here I am, telling stories about my childhood hardships,” he said.
Lee’s son sees it differently, “There is this great quote from ‘Death of a Salesman,’” he said. “Biff Loman addresses Willy, his father, saying that the things he loves in this world, the work, food and the time to sit and smoke are waiting for him the minute he says he knows who he is. And he questions why the hell he is trying to become what he doesn’t want to be. When I was younger and saw my father working till 2 a.m., I wanted to tell my father that. Maybe I’m just as disillusioned as he is but I am not going to go to a company and struggle and just end up getting laid off,” he said.