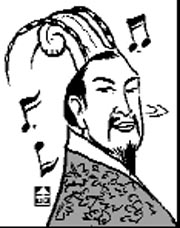 Zhou Yu, one of the heroes who appear in the Chinese historical novel “Romance of the Three Kingdoms,” loved music. He studied music, even though he was from a powerful family of intellectuals and generals. Zhou never just passed music by, even when he was very drunk. Unless the musician’s performance was perfect, he always found fault with it. His reaction to an unsatisfactory performance is quite interesting.
According to the Romance of the Three Kingdoms, Zhou always looked back when he heard problems in the music.
The gifted man must have been a disaster to musicians who surely wished the general would just walk away.
It certainly sounds daunting to have a general who would simply look back without saying a word when a performance was not perfect. The proverb that says, “A person will look back when you make a mistake,” originated from this anecdote.
A recently revised version of the Romance exaggerated the other two of the heroes in the original. Zhou’s significance was greatly diminished, although he was the real hero who fought the War of the Red Cliff, the war that decided the hegemony of the Three Kingdoms. In the official history, Zhou carries more weight than he does in fiction. Thus, the description about the rare artistic war hero’s musical gifts and the way he handled problems deserves a lot of attention.
A poet in the Tang Dynasty is famous for his phrase saying that if you want to receive attention from people you like, you should make mistakes on the strings from time to time. And according to folklore, if a mistake was made in a song, Zhou will look back.
These ancient stories come back to me because our president keeps reeling back to the past. He did so again, recently, responding to criticism about the “lost decade.”
He retorted that if anybody makes a list of things lost, he will find the items for the list maker. The Grand National Party must have been waiting for this, because they are making a list of what has been lost in the past decade of liberal rule.
The president again felt the need to respond point-by-point to the Grand National Party’s argument. What a useless fight.
Couldn’t he just look back and not say anything?
I know it sounds annoying to him, but it would be much more graceful if he would just wrap things up. Ultimately, the final judge on this matter will be the citizens.
The president should know he made too many moves, fighting against every word he didn’t like, too many times.