This ‘Kingdom’ is not worth a horse

This ‘Kingdom’ is not worth a horse 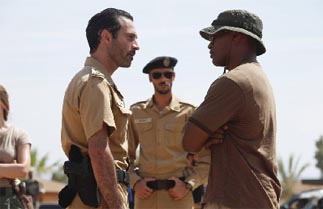 Omar Berdouni and Jamie Foxx anchor “The Kingdom,” an action film with a completely unoriginal script. Provided by Universal Pictures

Once upon a time, in a kingdom far, far away, a group of Important Actors got together, all concerned about Important Issues, to make an Important Cinema Event. The kingdom is Saudi Arabia. And the movie is really quite bad.
“The Kingdom” shows its own potential in the opening credits ― a brief history of Saudi Arabia in photography, newsreel-style voice over and animation. It lays out for us the stakes ― the American economy would grind to a halt if not for the oil we buy from the Saudis, and yet this is a nation whose leadership has treated the West with suspicion at best and hostility at worst. The most striking graphic in the opening is a world map, with countries raised according to their oil production, then according to consumption. Of course, Saudi Arabia is No. 1 in the former, the U.S. No. 1 in the latter. Not as affecting a political statement as the opening of “Lord of War,” which showed us the path of a single bullet from factory to the brain of an African child, but still an enticing beginning.
But it’s not to be. Despite an opening that looks straight out of one of the new breed of liberal documentary polemics, perhaps “Fahrenheit 911” or “Who Killed The Electric Car,” The Kingdom never delivers on any of its provocative promises. Instead, it’s a dull, formulaic trudge through cliche after Hollywood cliche, some offensive, others merely uninteresting. Nearly every single turn of the plot is completely preposterous and/or lifted straight from another terrorist-fightin’ action flick.
As the movie opens FBI special agent Ronald Fleury (Jamie Foxx) is called away from his child’s birthday party when a suicide bomber attacks a baseball game at a housing complex for American oil workers in Riyadh. But it turns out the initial bombing is just a distraction to allow a stolen ambulance to get on the scene and deliver the real payload ― a massive bomb that blows apart several high-rise buildings and leaves a huge crater, clearly both in imitation of the real-life Khobar Towers bombing that took place in the kingdom in 1996. Fleury is anxious to get his team on the ground to investigate, but ― here comes the first ridiculous “twist” ― the State Department won’t allow it because they’re worried more American “boots on the ground” will only lead to further anti-American reprisals.
Anyone who’s read anything about the current administration knows that if this was an actual situation the United States would have new investigators on the ground within hours, regardless of what anyone else in the world thought. And why shouldn’t we? Four extra infidels sullying the holy land isn’t going to make Osama bin Laden hate us any more or less.
But of course this little barrier is necessary, because it sets up our three-man, one-woman team as renegade cowboys who have to blackmail embassy officials and slip out of Dulles in the middle of the night.
On the team is Fleury, the leader-with-chip-on-shoulder, and his three dwarves, Whiny (Jason Bateman), Folksy (Chris Cooper) and Female (Jennifer Garner). Their handlers in the kingdom are the stately-but-wise young prince (Omar Berdouni) and his two competing underlings, the ruthless, incompetent head of the National Guard, General Al Abdulmalik (Mahmoud Said) and the solemn but honest cop, Colonel Al Ghazi (Ashraf Barhom). The former even goes so far as to stop the latter’s torture of the officer who shot two of the conspirators, accusing him of having no investigative skill.
Though it’s good to see so many Arab actors working, these roles are as narrow as those of the FBI agents. When Foxx asks Al Ghazi why he became a policeman, his response is because he read “The Hulk” and watched Steve Austin as a child ― a common enough device in these movies.
It is true that the relationship between the United States and Saudi Arabia is one of the most important in American international relations. And Americans are intolerably poorly informed about the country that keeps our economy from simply failing.
Yet “The Kingdom” contributes nothing to that political dialog, nor for that matter to the art of action cinema. Another wasted opportunity.