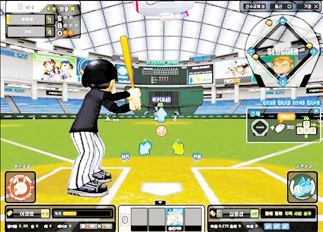 The Korean Series this year has been as popular as ever with die-hard fans, and the top two teams in Korea haven’t disappointed the faithful. Doosan versus SK proved once again baseball is more than just a game.
The fervor surrounding online baseball games this season has also reached fever pitch. Here are five online baseball games currently popular with virtual gamers.
Magumagu, developed by Anipark and serviced online by CJ Internet, has been gaining in popularity in recent months. On average 15,000 users play simultaneously, making it Korea’s No. 1 game.
The star attraction is the use of match statistics accumulated from real professional baseball matches in Korea. This makes players feel like they’re actually playing in the Korean baseball season.
Slugger, developed by Wise Cat and serviced on Neowiz, recently added the Incheon Baseball stadium as one of its backgrounds plus a replay mode for re-running plays of the day.
To attract more fans, Slugger held a special event until Oct. 19 called “Challenge Playoff MVP.” Participants during this 30-day event each received special gifts, such as vehicle navigation systems, movie tickets and a picture frame shaped like a baseball.
This game is also built around genuine team rosters and some players date back to the 1980s.
One problem: Slugger relies heavily on the keyboard, and keyboard control is really complicated.
WBaseball, developed by Gravity and serviced by Hangame, was first introduced to Korean gamers in August this year. It uses fictional characters like sexy girls and handsome guys. The cartoon-like game style is proving popular and it’s relatively easy to play. Instead of relying heavily on keyboard buttons, WBaseball uses the mouse to the maximum.
One of the better features of WBaseball is the speed of the pitcher. “Slash Slider” comes in at 170 kilometer per hour.
Even worse is the deadly 175 kilometer per hour “Tornado Rising,” which shoots up when it enters the strike zone, taking the batter completely by surprise.
However, not all online baseball games are doing so well. Unfortunately for online baseball game fans, New Baseball, developed by Neople and serviced by HanbitSoft, has pitched its last innings and goes out of service at the end of the year. It was the first online baseball game to be introduced in Korea, in August 2005.
But Kwon Young-shik, an executive at CJ Internet, remains upbeat. “The number of visitors to online games usually drops off when the regular season is over.
But this year the new features added to the online games are keeping gamers hooked. “This kind of upgrading means virtual baseball games won’t die out,” Kwon said.