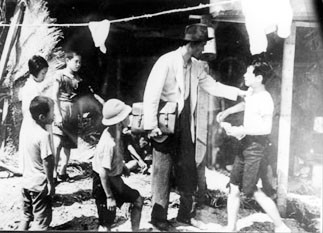 Angels on the Street

One part of history that Koreans would loathe to see repeated would be the Japanese colonial period from 1910 to 1945.
This period of decay meant the end of hope for many Korean artists. In 1926 the poet Lee Sang-hwa wrote, “Will spring ever return to the land that has been stolen?” Well, it seems the sun continues to rise over this stolen land and artists continue to thrive.
During the colonial period some Korean filmmakers chose to collaborate with the government. At that time it seemed the Japanese occupation would never end. Watching a Korean actor saluting the Japanese flag will not be a pleasurable experience for Koreans today, but it is still a good lesson from history. That said, the recent release of four Korean films that carry different levels of propaganda about the colonial government deserves attention.
The DVD collection titled “The Past Unearthed” is interesting because it was the state-run Korean Film Archive that decided to make the release, complete with English subtitles. The national archive has made a big effort to restore lost copies of films from the past, and this DVD set is one of the fruits of this project.
The four films ― “Angels on the Street,” “Volunteer,” “The Straits of Chosun” and “The Spring of the Korean Peninsula” ― came out of a storehouse of old films in different parts of China.
The DVDs also contain a host of extras, such as documentaries on featured directors and actors and a commentary by a film critic, again all with English subtitles.
The most well-known film in the collection is “Angels on the Streets,” directed by Choi In-kyu and starring Kim Il-hae, who plays a well-meaning man who brings children out of the gutter and opens an orphanage.
Throughout its 73 minutes, the film promotes moral values, such as the need to care for the less privileged and to be diligent.
The most interesting part, though, comes in the last sequence, when the children at the orphanage suddenly swear their endless loyalty to the Japanese emperor. This highly political scene strikes a discordant note, but the camera doggedly follows the children chanting the “Oath to the [Japanese] Emperor” in Japanese.
One of the surviving actors, Song Hwan-chang, recalls in a supplementary interview that it could have been a way to dodge censorship by the colonial government.
“Volunteer” is a film with an outspoken propaganda element.
It features a Korean farmer who dreams of being a volunteer soldier for the Japanese army. Lines like “It is time to devote ourselves to the Emperor” and “Become a soldier for the country” are prevalent in this film, produced in 1941 when Japan was at war, gathering soldiers and war supplies from Korea.
The other two films, “The Spring of the Korean Peninsula” and “The Straits of Chosun” have a pro-Japanese slant.
The question now is whether Korean viewers will welcome the films. Min Byung-hyun, an official at the Korean Film Archive, thought the film had historical value.
Seasoned film critic Kim Jong-won echoed that thought in the documentary, which comes as a supplement to the DVD.
“It may be a disgrace to watch propaganda movies for the Japanese made by Korean filmmakers,” Kim said.
“Still, it is a part of history that cannot be changed, and we have to accept it as a stain on our history.”
The DVD set is available online and at downtown bookstores like Kyobo and Youngpoong for 33,000 won ($36).