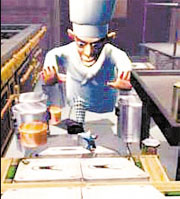 “Ratatouille” was one of the best movies released this year. The idea of a rat possessing the ultimate talent for cooking is amazingly original. A film that is deliciously humorous and entertaining, however, does not automatically convert to a successful game.
Experience shows us that not all great animated or feature films that venture into the world of computer games will meet with the same degree of success they enjoyed in celluloid form.
Ratatouille, the game on PSP, falls somewhere in between. Younger players might find this game entertaining, but the older generation is unlikely to find it that challenging.
Ratatouille consists of a variety of mini-games, which are played out from the viewpoint of Remy, the rat who dreams of being the best chef in all of France.
Whereas the movie focuses on Remy’s dream to be a great chef, the game focuses more on his comical adventures as he sets out to pursue his culinary dreams. We see him scavenging for food in various parts of Paris in order to feed the rat colony. Locations include sewers, pipelines, the markets and Gusteau’s, the restaurant made famous in the movie.
While looking for keys to unlock places where food is stored and disabling rat traps along the way, Remy has to stay one step ahead nd avoid capture. Occasionally his missions are interrupted by mini cooking games.
However, for an older audience the game might seem too repetitive. No matter how many mini-games are included, such repetition might make them feel a bit like rats spinning on a wheel, stuck on a never-ending journey.