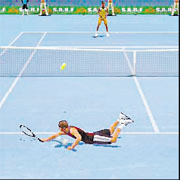 The first time I got to play the original Smash Court Tennis game, the excitement was more than words can express. Playing against your favorite tennis players on a video game is a kid’s dream come true, especially when you never had the chance to make the school’s varsity team.
Smash Court Tennis 3 on the handheld portable platform PSP brings out the same level of excitement of the original.
The best part of this game is the precision required to produce volleys and serves. Timing is crucial for sending the ball in the right direction. It’s not easy for sure, but once you get the hang of it, you’ll soon start to see how sensitive timing helps players win matches.
If a player wants to try something entirely new, there is the pro tour mode where the player creates his or her own character. The player starts out ranked 250th in the world and then pushes up the ranks by winning games.
What really brings Smash Court Tennis down, though, is how slowly the players move around the court. A player might find himself grinding his teeth when the ball smashes cross court and the tennis player in slow motion misses the shot. You’ll need to be especially patient when moving players across court to chase down a lob.
Another disappointment is that Venus Williams remains absent from the roster because of her exclusive contract with Virtual Tennis.
All in all, Smash Court Tennis is an exciting alternative to playing real tennis in the nearest court. You can leave your racquet stashed in the closet and still win matches.