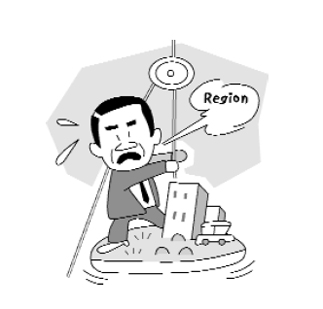 The first thing that might surprise someone from Tokyo when visiting Osaka for the first time is escalator manners. In Tokyo, which is in Japan’s Kanto region, people ride the escalator on the left. They leave the right side for people in a hurry so they can walk up the escalator. However, in Osaka, which is in the Kansai region, it is the opposite. So expect possible minor inconvenience on escalators.
A funny thing is that there is a regional boundary for this practice. Sekigahara,130 kilometers (80 miles) east of Osaka, follows the Tokyo style, but areas to the west follow the Osaka style. At the Tarui Station in Sekigahara, both practices are followed. There are many explanations for the difference between the Tokyo and Osaka styles. The first is subtle competition.
When Osaka hosted the 1970 Expo, it brought in the system of riding the escalator on the right side. Since most people are right-handed, the reasoning went, they can easily grip the escalator handrail. Going against this view, Tokyo made it a rule to stand on the left, designating the right side the “passing lane.” The boundary for this practice became Sekigahara, where the two regional powers fought a battle 400 years ago. In the Battle of Sekigahara, the eastern army commanded by Ieyasu Tokugawa defeated the western force lead by Hideyoshi Toyotomi and brought the center of power from Osaka to Tokyo, then Edo.
Some try to find the answer from historical custom. In Kanto, samurai culture was very strong. Samurais were always alert for enemies and strangers. They always left their right side clear so they could take out their swords in emergencies, and walked on the left. Some say it was to avoid swords swinging from the opposite side. Meanwhile, the Kansai region had a strong merchant culture, where the abacus was used with the right hand while the left was used to show the merchandise; this explains why Kansai people kept their left side free.
With the Korean presidential election coming, regionalism is on the rise again. A candidate from the Chungcheong region remarked, “To get rid of regionalism, the Chungcheong Province must be put in charge of the government,” inciting local feelings even more. However, in Osaka and Tokyo, which are noted for local feelings, there is no such thing as voting only for the candidate from their region. There is also no such thing as local support organizations, as there are in Korea.
Sekigahara is simply a cultural and emotional boundary. Candidates running for the presidency and the people of Korea should keep this in mind and learn from it.