Every little thing she does is magic

Every little thing she does is magic 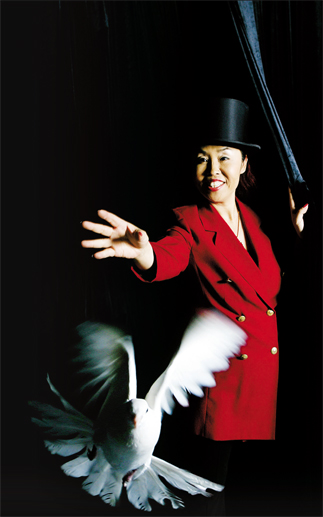 She stands in front of her audience under the glare of the lights, a seductive jazz soundtrack playing in the background. She raises her arms and with a flick of her wrists sends a stream of crisp banknotes fluttering across the stage. The trick is quite an illusion, but how she does it remains a mystery. Real magicians never reveal the secrets of their art.
Chung Eun-sun, one of Korea’s most accomplished magicians, says this trick is one of her favorites.
“Audiences love to see money produced from thin air,” she said. “It never fails to entertain.”
Magic is one of the best-loved forms of popular entertainment. Classic acts involving playing cards and fake coins, rabbits leaping out of top hats and unsuspecting volunteers getting sawn in half can leave even the most cynical of audiences baffled and bewitched.
Chung is one such entertainer, and for three decades she has been conjuring up her own brand of spells and wizardry with a tantalizing variety of tricks that, being the consummate professional, she keeps safely tucked up her sleeves.
But what makes Chung stand out as a magician in Korea is her status as the first professional female to make a living as an illusionist. There were none before, and there have been relatively few after.
But so respected is she among her peers today that she is now the president of the Korean Magician Society.
“When I first started my act, the entire industry was run by men,” Chung recalls. Even today the number of female magicians. according to Chung, is relatively small. “There are 1,500 members of the magician society, but the number of women makes up just 10 percent.”
Chung has been working in the industry for many years but her age, like her tricks, remains a mystery. She says magicians never reveal how old they are.
She grew up in a very conservative household and magic was the last thing on her mind as a career. Her father was an Oriental medicine doctor and her upbringing was rather strict. The closest she came to magic was reading comic books about the Invisible Man.
“I would sit in front of the bookstore waiting for the latest edition and then rush home to read,” Chung said.
In fact, her career as a magician happened by accident rather than by design. In high school she developed a major crush on her Korean-language teacher, and driven by an innate curiosity, she started reading up on mind control.
“I wanted him all to myself,” Chung said, with a mischievous grin. “I wanted him to like me and only me.”
Naturally, she studied psychology in college where she learned more about mind reading, and she eventually gravitated toward magic.
“I was watching a magic show once in which a hypnotist made someone float up in midair,” Chung said. “After watching the show I realized that hypnosis was in fact a kind of magic.”
Her interest piqued, Chung began hunting through the newspapers for information about magic shows, which were often performed late in the evening.
“I started staying out late to see these shows but when my mother found out, she was furious.”
Parental opposition did not deter her, though. She made her debut in 1978, according to the Magic Society Web site (www.kms82.org), when she was probably in her late teens.
Her stage debut came about after a professional magician noticed the young Chung in the audience night after night. Eventually, he asked if she was interested in trying out some tricks on stage and thus her career began.
Chung said she gained immediate popularity because she was the only woman magician around and she wore a fetching miniskirt.
“There were times when I worked one nightclub after another,” Chung said. In a single night she could visit up to eight clubs in Seoul and Gyeonggi. “By the time I got home, dawn would be breaking,” Chung said.
Like most wizards, Chung started off doing simple tricks using cards and coins. She soon graduated to trickier acts such as sawing people in half. 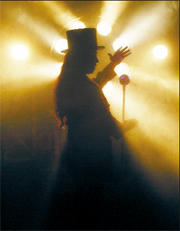 Chung said the European style of magic suits Korean audiences better. “Small nations grouped together to form Europe,” she said. “Hence the style of magic popular in Europe is more intimate and sweet, unlike the U.S. style, which tends to be performed on a large scale.”
To learn the tricks of the trade in Europe, Chung would work for three months in Seoul then use all her savings to spend a month in Europe studying magicians. But no matter how much money she offered in tuition, some would not teach her their skills.
But she met a lot of magicians, saw many acts and even met the world-famous David Copperfield.
Although she still receives invitations to perform elsewhere, Chung mainly works in her club, Magic Bar (www.magicbar.co.kr), where she also trains her apprentices.
“Our mentor is normally really nice, but when it comes to magic, she’s a completely different person,” said Choi Jeong-hwan, 28. Choi has been learning magic from Chung for the last two years. “I used to work on my own but that was at an amateur level. I became an apprentice to Chung because I really wanted to reach a more advanced level.”
Kim Jin-hoon, 18, became an official apprentice to Chung only four months ago. She says her teacher is a perfectionist. “Every hand motion and every breath or pause counts,” Kim said. “She is strict, right down to the very last details.”
Kim started off on his own and couldn’t actually perform on stage until he became an apprentice to Chung.
Chung’s favorite apprentice is Park Min-soo. He won an award this year at the KBS magician battle, and in July won the people’s choice award during an international magician competition in Australia. Park has been learning magic on his own since he was in the third grade of elementary school. Now a second-year college student majoring in entertainment and acting, Park has been under Chung’s tutelage for four years.
“I met her when I was participating in an international competition overseas,” Park said. “She was a judge and that night she gathered together the Korean magicians who had been taking part.”
“I’d never met this person before but when she saw me she corrected my mistakes and pointed out flaws in my act,” Park said. The young magician said Chung asked if he wanted to perform at her bar. “First I performed once a week, and then one day I decided I wanted to learn more.
Chung points out that magic isn’t just a matter of skill. “A magic show isn’t a magic show without entertainment,” Chung said. “It’s the showmanship that really grabs the audience’s attention,” she added.
Today Chung is busier than ever. In an effort to hold the first Asian regional competition next year, she has been running around town meeting people at the Culture and Tourism Ministry and the Korea Tourism Organization for funding as well as the chairman of the Federation Internationale des Societes Magiques, or the International Federation of Magic Societies. Chung is a frequent judge at FISM competitions.
“The FISM has a magician competition similar to the Olympics and it’s held once every three years,” Chung said. The next FISM competition is scheduled to be held in China in 2009.
“One day I realized that if there was a regional competition held every year, it would help the magic industry in this country,” Chung said. She started work on the idea in 2003 and then submitted a proposal to the executives of the international society.
According to Chung, Daejeon is showing interest in hosting the competition. “Today I feel more like an administrative expert rather than a magician,” Chung said. “It’s not easy trying to host this event and carrying out my duties as president of the Korean Magic Society.”
The society, which started off as a social gathering of magicians back in 1982, gained official recognition from the Korean government in 2003.
In almost 30 years of pulling doves out of thin air, Chung has never regretted a day. “Magic has given me a great deal of joy and pride,” said Chung. “It is my turn to give back.”
Chung’s Magic Bar is located in the basement of a building in front of exit No. 2 at Nakseongdae Station on line No. 2. It’s open from 6 p.m. to 2 a.m. and there are three shows a night, starting at 8, 9:30 and 11 p.m. The bar serves alcohol and food.