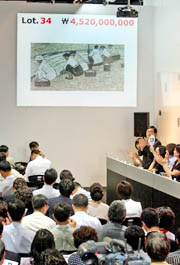 Faking it: the shady world of art forgery
It has taken more than two long years for prosecutors to confirm that 2,800 items belonging to the art collector Kim Yong-su are fake. The works in question are by two of the most important Korean artists of the 20th century, Lee Jung-seob and Park Su-geun.
The case was the first in which Korean prosecutors filed criminal charges against individuals involved in art forgery.
When prosecutors filed a detention warrant against Kim, many reporters were amused by the number of pages in Kim’s written warrant. It was 10 pages longer than the usual warrant.
In what many reporters described as an “art catalogue,” Kim’s warrant carried the source of each of the forged images, studies on the way an artist’s signature changes over time and details about the materials used in the forgeries and the originals, plus a complete list of expert-footnotes.
The day after the court issued the warrant, many Korean newspapers published detailed descriptions of the unfolding events. Koreans haven’t seen anything like it before.
The prosecutor, wearing white gloves, held the forged drawings in front of the judge, taking care not to damage them. If a work wasn’t a fake, he had to be sure he didn’t damage it.
In fact, prosecutors have deliberately choreographed the whole investigation to set a precedent in the Korean art world about art forgery. It’s an issue that has been the subject of many whispered conversations among collectors as they gather at the pre-openings of art auctions. But the issue has never been publicly admitted or discussed. 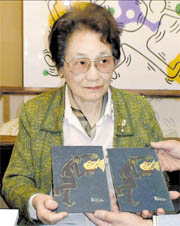 The Japanese wife of the artist Lee Jung-seob holding examples of fake and original art by her husband, one of Korea’s most cherished painters.

Kim’s warrant is a stern warning from prosecutors that forgery will be punished. It is also tacit acknowledgement that the art market, which has increased 300-fold in the past nine years, is big business and that forgery is threatening the credibility of the Korean art market.
But to what extent is forgery really considered a criminal act in Korea? The boundary between a fake and the genuine article remains unclear, especially after the prosecutors dropped charges against many collaborators who had helped Kim distribute the forged artworks in the market.
Before the case was brought to the attention of the public, gallery owners had acquired drawings from Kim that lacked proper authentication, knowing that the originals in Kim’s collection would simply not be available at the same price.
The case also involved the son of the artist Lee Jung-seob, Lee Tae-seong, who insisted his own family acquired the drawings when his father visited Japan to join his Japanese wife and two sons in 1953. The prosecutors later discovered that the drawings came from Kim, but Lee, a Japanese citizen, denied these charges. 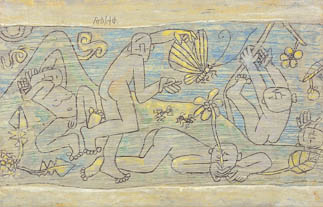 “The Children of Spring” by Lee Jung-seob, one of Korea’s most influential painters, is genuine, unlike many recently revealed counterfeits.

The forgery scandal began in 2005 when appraisers from Seoul Auction House, the nation’s most powerful auctioneer, authenticated and sold five of Kim’s drawings worth 919 million won ($1 million). They turned out to be fakes.
Many art experts say the story really revolves around the appraisers’ lack of moral fiber rather than their inability to identify what is a forged piece of art and what is genuine.
They say Kim’s drawings showed obvious signs of forgery. For example, some used metallic pigment from car paint, even though that kind of paint was invented decades after the artist’s time. Some experts even claim that middle school students could have spotted these artistic anomalies.
Even more bizarre, prosecutors found one drawing in Kim’s collections in which the forger had accidentally traced over an original image from an artist’s exhibition catalogue that had printed the picture backwards by mistake.
On the back of another of Kim’s drawing, signed by Park Su-geun, another artist in the controversial collection, the investigation team found the fading signature of a middle school student. That student later turned out to be the drawing’s original creator who had sold the picture to an antique shop in Insa-dong five years ago. 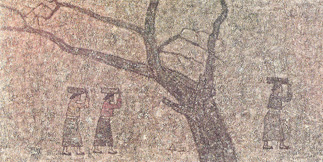 “Homecoming” by Park Su-geun, a famous Korean artist whose work has been the subject of the forgery scandal that has rocked the Korean art world.

“These were not even very professional examples of forged art,” says Choi Myung-yoon, a professor of cultural preservation at Myongji University. Choi also heads the team investigating Kim’s recent case. “They were sloppy, crude drawings, which didn’t even need the artists’ originals for comparison. If experts were fooled into believing these works of art were real, it must have been deliberate.”
The issue of ethical authentication has been talked about a great deal in the Korean art world. The prices of artwork by the so-called “blue-chip artists” has been blown out of proportion at recent auctions. The problem is that art is increasingly being seen as an investment by collectors who have little or no interest in art.
There is also a major conflict of interest when gallery owners in Korea serve as appraisers for their own collections.
“If you’re a gallery owner, you’re unlikely to identify your own work as counterfeit,” says Kim Beom-hun, the president of Portal Art Auction, an on-line auction house that only sells the work of Korean artists who are still alive to avoid the risk of fraud.
“These gallery owners in Korea are probably looking for sellable art,” Kim says. “That means they are more likely to be sizing up the work of big-name artists whose work isn’t easily available, in which case they’re putting themselves at a greater risk of exposure to counterfeit art. That’s the market theory.”
Market rules, though, are expected to toughen up in the future following the scandal. Auctioneers and gallery owners will face greater challenges in restoring their credibility.
“They’ve disgraced the entire industry,” says Yoon Yeol-soo, the director of Gahoe Museum, which specializes in minhwa, or folk paintings. “They should know better than anyone when a piece of art is counterfeit. For them, it is a matter of whether their gallery will still be in business the next day after selling a single piece of artwork. They should have known if the art was a fraud.”
For transparent authentication, others suggest the need for a state-run organization to certify appraisers to work independently. 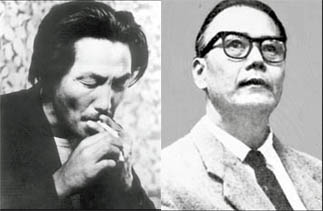 Currently the Korean Art Appraiser’s Association, which is made up of gallery owners, senior art historians and art professors, serves as the nation’s only public institution for art appreciation. The group, however, is deemed inefficient because it lacks the technical facilities crucial for assessing controversial artwork in a scientific manner.
But first, experts say, the industry needs to develop a mature environment for a commercial art market. They say buyers should appreciate art for its intrinsic merit rather than its base commercial value.
“If the industry were made up of collectors who genuinely love the artist’s work, you wouldn’t be fooled like this,” Choi says. “The scale and quality of the forgeries means there’s just no love for art anymore.”
Long before wealthy collectors and powerful auction houses in Korea coveted Kim’s forged paintings, artists like Lee Jung-seob and Park Su-geun represented the soul of the generation devastated by war and hunger.
“Lee was so poor that he lived in the attics of the homes of his artist friends,” says Joon Lee, a painter who knew the artist from the 1950s. “He had such a pure spirit. He used to draw on the silver foil inside cigarette packs using the tip of a nail. He gave the pictures away to his friends who shared food and drinks in return.”
The artist died at the age of 40 from malnutrition and hepatitis at a hospital in Seoul.

Park, who had no formal training as an artist, represents a similar kind of artist, one who struggled for his art and suffered great poverty and hardship.
He eked out a living by drawing portraits of American soldiers at the PX, and when he proposed to his wife-to-be, Park wrote, “I am an artist. All I’ve got is a brush and a palette. If you marry me, you’ll suffer material hardship but I can make you the happiest woman. I’ll try to be a respectable artist. Will you be the wife of such a man?”
Park eventually lost the sight in his left eye due to complications from heavy drinking. He continued painting, but died aged 51.
Ironically, his painting “Washing Place” became the most expensive artwork ever sold in Korea, fetching 4.5 billion won ($4.84 million) at the Seoul Auction earlier this year.
The painting shows women by a stream washing clothes, a scene typical of a folk village in Korea.
“Creating art is a tough process,” says the artist Joon Lee. “It’s natural that the work of some artists gets valued more for its rarity, but it’s unpleasant to see auctioneers and collectors conning people. These artists led tough lives, but our stomachs are too full to see that.”