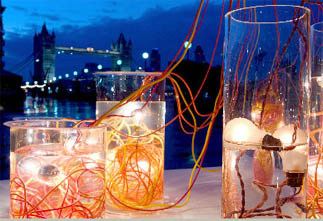 Aspects of light in our daily lives will be touched upon in “All Light! ― All Right?” It’s the fourth exhibition in the living design series at the Hangaram Design Museum at the Seoul Arts Center.
The series, which started off with the “Good Chair” exhibition in 2004, showcases industrial designs found in our everyday life, from chairs and hotel rooms to light installations.
There will be six main parts to the exhibition, including an interactive program in which visitors can experiment with witty light designs that change their color and form. Part one, “Light,” will serve as an introductory guide to the exhibition, diving into the specific role light plays in various man-made spaces. Work by designers including Verner Panton, Poul Henningsen and Vico Magistretti will be featured. This part of the exhibition will focus more on the practical side of light. Features include Richard Sapper’s famous Tizio lamp, used worldwide by architects and designers, and Vico Magistretti’s Teti luminaire. The latter is a simple, rational and timeless design which has endured for decades.
The second part, “Light Palette,” explores the conceptual aspects of light as designers including Kazuhiro Yamanaka, WOKmedia and Hector Serrano introduce their own concepts of space relating to light. “London at 5 p.m.” by Kazuhiro Yamanaka displays light installations in the shape of clouds floating around what appears to be the ceiling of a grand ballroom. To explain the work, the designer wrote, “Clouds are not obstructive objects for sunshine but work as a dramatic director for the sun.” 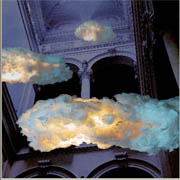 Design group WOKmedia’s “Flood” features large-scale transparent cylinders half-filled with water, with lit lightbulbs inside. The designers claim that they can dip their hands in the water and not get electrocuted. “There is so much competition in the field of lighting that we decided to make a bad idea that works,” the group said, refusing to reveal how they created this mystery of a design. “It’s a secret,” they said.
In addition, there will be outdoor displays by designers including Minsang Cho and Sam Liu.