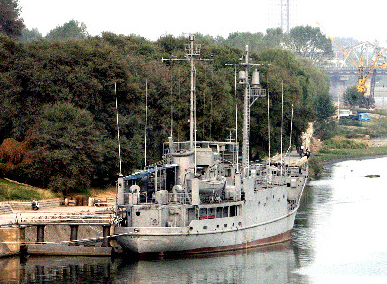 The USS Pueblo, moored on the Daedong River in Pyongyang, became a trophy symbolizing victory over imperial America. By Kim Tae-seong

On Jan. 23, 1968 North Korean Navy captured the USS Pueblo. It was an unprecedented event in United States history for a U.S. Navy vessel to be captured by foreign forces with which it was not at war.
Pyongyang claimed the capture was legitimate because the Pueblo had violated North Korean territorial waters. Washington insisted that capturing a foreign vessel in the open sea was an obvious act of military provocation.
The United States was resolute in handling the crisis, willing to use nuclear weapons if necessary.
The nuclear-powered aircraft carrier USS Enterprise set out to the sea off Wonsan on North Korea’s east coast and 360 fighter planes from Okinawa were arrayed around the Korean Peninsula.
However, a war meant giving up the lives of the 82 crew members who had been taken prisoner in the North. Also, at the time the United States was struggling in the Vietnam War; it could not afford to start another war.
In the end, Washington chose to negotiate.
After 10 months of exhausting negotiations, the United States admitted that the Pueblo had violated North Korean waters and apologized to Pyongyang.
North Korea sent back the entire crew through Panmun-jom. However, it never returned the vessel. The Pueblo was taken from the port of Wonsan to the Daedong River and became a trophy symbolizing a victory over imperial America.
Almost 40 years later, on Oct. 30 this year, a U.S. destroyer rescued a North Korean vessel from pirates. The U.S. Navy warship James E. Williams came to the aid of Dai Hong Dan, a North Korean commercial vessel that had been captured by pirates off Somalia.
The International Maritime Bureau passed the hijacked ship’s distress call to the U.S. Combined Maritime Forces Headquarters based in Bahrain, which ordered the Williams to rescue the Dai Hong Dan and its 22-man crew.
The Williams immediately sent helicopters to the site and launched a rescue operation, sailing 50 nautical miles. As the U.S. vessel approached, the North Korean crew members fought back and overwhelmed the pirates, using weapons they had hidden.
In the course of subduing the pirates, the American sailors gave first aid treatment to the injured and moved three North Korean crewmen who were seriously wounded to the Williams for medical attention.
The U.S. Navy keeps a tight watch over North Korean ships. In December 2002, a U.S. warship captured a North Korean vessel loaded with weapons in the open sea as it sailed for Yemen.
Last year, right after the United Nations Security Council announced sanctions against North Korea, a report came out that U.S. forces were tracking the whereabouts of North Korean ships sailing in Southeast Asia.
The U.S.-led Proliferation Security Initiative, which aims at stopping the proliferation of weapons of mass destruction, has North Korean vessels among its major targets. It is therefore notable that a U.S. ship assisted a North Korean ship to fight off the Somali pirates, who have been preying on international shipping in the area.
Just as you don’t ask the name of a drowning person you are saving, you don’t care about nationality when you save sailors from jeopardy.
The rescue of the Dai Hong Dan might have happened by coincidence, but it could be another auspicious sign of positive changes in the relationship between North Korea and the United States.
It is only appropriate to express gratitude for the humanitarian deed.
Pyongyang needs to express its thanks to Washington in every way.
In return for helping save the Dai Hong Dan, how about offering to send the Pueblo, now on exhibit along the banks of the Daedong River, back to the United States?
With progress in the nuclear issue, the deadlocked U.S.-North relationship is improving.
The process of disabling nuclear facilities at Yongbyon began on Nov. 1. On the day the Dai Hong Dan was rescued, a ship loaded with heavy fuel oil provided by the United States arrived at a North Korean port. A North Korean taekwondo team is on a tour in the United States, and the North Korean women’s soccer team is planning to play a friendly match with the U.S. national team in the United States. The New York Philharmonic Orchestra is planning a concert in Pyongyang.
When the ice melts, spring comes.
You have to use an opportunity when it comes. If Pyongyang returns the Pueblo to the United States, U.S.-North Korea relations can enter a new season. The rescue of the Dai Hong Dan could be a harbinger of spring in U.S.-North Korea relations.

*The writer is an editorial writer and traveling correspondent of the JoongAng Ilbo.