Recollecting a classy past

Recollecting a classy past 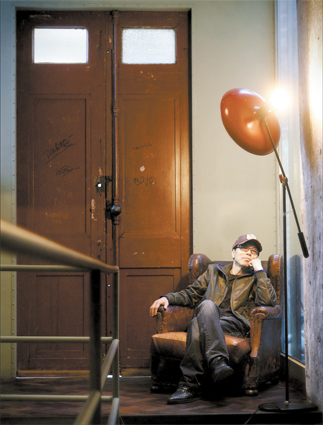 Kim Myoung-han, owner of the Agio restaurants in Seoul, lounges in one of his favorite chairs, just one of many items of vintage furniture housed in the newly opened aA Design Museum in Hongdae.

Kim Myoung-han played Goldilocks as he picked out the best chairs for our photo shoot. Furniture is not something he takes for granted.
The owner of Agio, a chain of Italian restaurants in Seoul, Kim has been obsessed with vintage furniture for the past 30 years. His private collection of vintage designs, one of the largest in Korea, is showcased at aA Design Museum in Hongdae, which he opened in May.
Like Kim, 55, who dresses casually in baseball caps and jeans but still looks at home sat in one of his precious chairs, the collection is full of surprises.
There’s a canary-yellow sofa, a small reading chair made of black-and-white print fabric, an old seat from a long-forgotten beauty salon and, oddly, a bust up passenger seat from an airplane.
“This is my favorite,” Kim said, patting the back of a small, plain-looking chair as if it were a child.
“You used to find this kind of chair all over Europe during the early part of the 20th century,” he said. “It’s sturdy, functional, good-looking and affordable ― everything a chair is supposed to be.”
Some of his collection is for sale, though rarely those items handmade by famous designers. Kim keeps his prices low and thinks vintage furniture in Korea is too costly.
“Five years ago the dealers who introduced vintage furniture to Korea made a mistake,” Kim said. “They charged too much and scared off the public. Their prices created the idea that vintage furniture is only for the rich, which is total nonsense.”
Kim’s collection, spread over five floors in the museum, includes the Poeten Sofa designed by Denmark’s Finn Juhl, table sets by Ellen Grey, “Couch on Wheels” by Marcel Breuer and chairs by Verner Panton. Tours take place on Tuesdays, Wednesdays and Thursdays.
Kim takes great pride in his collection, but he doesn’t encourage others to pursue such an expensive hobby-cum-business.
“If customers aren’t serious collectors, I tell them not to splurge. It’s better to buy something that’s satisfying and affordable,” he said.
In any case, knowing the date a piece of furniture was made is virtually impossible unless it’s handmade. “There’s no need to pay lots of money for pieces that have been mass produced,” he said.
This makes sense when you consider that the original idea behind industrial design was to make affordable, practical designs for the masses, as Kim pointed out.
In contrast to his museum, Kim had a relatively humble upbringing. He began collecting furniture in his 20s and used to pick up abandoned furniture from Hwanghak-dong and Itaewon.
“Back then, American military personnel used to toss out lots of great pieces of furniture,” he said.
After his restaurant business boomed, Kim finally had the cash to build a significant collection. He began travelling extensively throughout Europe in search of rare items.
These days Kim uses regular dealers off- and online, but when he started, information was less easy to come by.
“The Internet wasn’t around, and I just dived in like a hungry boxer.”
Kim’s favorite pieces tell special stories, such as a console by Italian designer Gio Ponti that dates from the 1940s or 1950s. “It’s one of my favorite eras, just after art deco and art nouveau,” he said.
The legs on the console are art deco but the top is modernist. “Art deco influences these pieces even if the designers were not consciously aware of the fact,” he said.
Kim regrets that traditional Korean designs have lost their influence with young Korean designers. “It’s not their fault, really. Traditional Korean furniture disappeared from our homes a long time ago,” he said.
However, Korean designers are producing groundbreaking work with new materials such as titanium, aluminum and ply- wood, Kim said.
Next March Kim plans to fill up another museum, this time with furniture from the 1800s. “I’ve put all my 20th and 21st century furniture in the aA Design Museum, so I need someplace to display the rest of my junk. ”
One of his long-term projects is to open four vintage pensions, a kind of Korean bed-and-breakfast, in Gapyeong, Gangwon. Each one would be decorated with furniture from his collection.
“Furniture is different from sculpture because it is part of our everyday lives and anyone can appreciate its value,” Kim said, carefully replacing the chairs after our interview. “You need to sit on it, feel it and look at it to understand it,” he said.