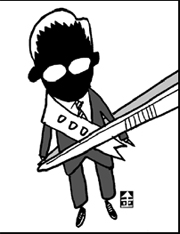 There have been 16 presidential elections since the Republic of Korea was founded in 1948. Happenstances likely to be seen only in movies have occurred since the third presidential and vice presidential election.
In May 1956, candidate Shin Ik-hee suddenly died of a cerebral hemorrhage on a train on his way to an event 10 days before the election. The public expressed its sympathy in the massive volume of votes dedicated to Shin, which were counted as invalid votes or a decision not to vote.
Tragedy repeated itself four years later. Presidential candidate Chough Byeong-ok in the 1960 presidential election was 65 and had stomach cancer, which caused him to leave for the United States for treatment. Then-President Syngman Rhee immediately held a cabinet meeting and moved up the election by two months. Chough died soon afterward. Chough Soon-hyung, a National Assemblyman and third son of the late Chough, said the pressure of the early election probably helped hasten his father’s death.
Some members of the Grand National Party argue in favor of having a spare candidate for the one-in-10,000 chance that their party candidate may not be able to run in the coming election. Others agree, considering that a lot of unimaginable factors have frequently affected presidential elections in Korea.
However, if we look at the United States, which has had a presidential election every four years since 1789, not once has there been an incomplete election due to the death of a candidate of either party.
That said, eight presidents have been unable to complete their term in office because of illness or assassination. William Harrison, elected in 1840, died of pneumonia one month after his inauguration, in which he insisted on speaking despite heavy rains and cold weather. Abraham Lincoln was the first of four presidents to be assassinated.
Ronald Reagan faced lethal threats during his presidency.
When he ran for the first time, Reagan was defeated by Gerald Ford in the Republican primary in 1976. He unconditionally accepted the result.
That honorable acceptance of the rules of the game gave him a platform four years later. He was elected that year at age 69 as the oldest U.S. president, then re-elected in 1984.
In discussion about politics, Confucius said, “If you hurry, you won’t get there; if you are obsessed with small interests, you won’t achieve big things.” It is sad that we are in a situation to remembering Reagan and Confucius, 47 days before the election.