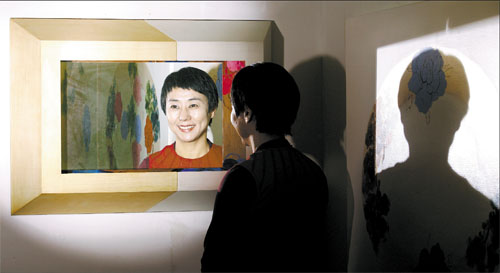 A blind child “sees” art with an association volunteer at a workshop in Soma Museum, southern Seoul.

Though contemporary artist Oum Jeong-soon, 46, had her eyes wide open, she could not see.
As a painter, she constantly asks herself what it means to see and instinctively felt that “what people believe to be a cup may not be a cup.”
This small doubt created a pathway to her two careers - an independent artist endlessly observing objects and a social artist who works with blind children. Oum says the two ultimately merge into one.
Ever since Oum came back to Korea after studying fine arts in Munich during the late 1980s, she has been unveiling the mystery of observing.
To her, objects are never conventional.
Instead of setting out to draw the figure of an ordinary man with two hands and feet, Oum imagines the figure in the process of sketching.
She reaches out for objects as if she has never seen them before, like an insect using its tentacles to feel.
Oum’s career started with lines. Without any preconception of objects, she slowly and steadily drew out countless lines on paper.
Line collections driven by natural inspiration later led to painting objects, such as hands, candles and flowers, Oum said. Though she doesn’t decide which object to sketch beforehand, each line is a piece that contributes to her final product.
While searching for imaginative figures, the fundamental question that she asked about “seeing” still whirled around her head.
“People approach objects differently,” she said. “Some understand by looking from afar, making a noise, disconnecting or dismantling an object.” That’s when she came across another tool of seeing ― the eyes of the blind.
Motivated by an intense curiosity to know how the blind study and view objects, Oum established the Korean Association for Blind Artists, hoping to introduce a new form of art. She believed that “seeing with the eyes is one thing and seeing with the heart is another.”
With 10 members from the association, Oum promoted the “Another Way of Seeing” project in 1996.
She realized that by interacting with the blind she wasn’t the only one pondering the fundamental question concerning the act of seeing.
“I was groping to see art and the sightless children were groping to live,” she said.
Several encounters with the blind sparked her interest to create new modern art.
“I was amazed by how the blind use the heart and other senses to see,” Oum said. “I saw a whole new world.”
Slowly and steadily, Oum approached blind students with the desire to learn about this new world. She volunteered to teach art to blind students and held workshops.
The association worked with three schools for the blind - Chungju Sung-mo School, Seoul National School for the Blind and Hanbit School for the Blind. There are in fact 12 schools for the blind in Korea. 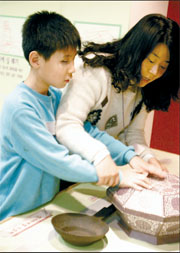 A blind child is helped to appreciate art at a workshop in the National Folk Museum of Korea, downtown Seoul. Provided by the Korean Association for Blind Artists

The Another Way of Seeing project involves holding workshops and exhibitions, making Braille art books and researching and developing art education programs.
It also establishes international networks, such as with “Able Art,” an art organization for the disabled in Japan. Artists, designers, curators, special education experts and sociologists plan the projects.
At first, it was a tough task for the group to provide arts education to the blind. There was little established infrastructure for the blind in Korea.
“The first thing we did was make the public more aware that seeing does not involve only the eyes,” Oum said.
“We emphasized that how you view objects differs from individual to individual. And artwork is created based on how you see. The blind create. They’re artists, just like me.”
To Oum, interacting with the blind isn’t just voluntary work. She says they are working partners - they learn from each other.
“Modern art is all about emotions, themes and abstract paintings,” Oum said.
“It’s beyond experimenting with concrete objects. There is no definite boundary in becoming an artist. Physical and social conditions become tools in modern art.”
Currently, there are 89 students studying in Chungju Sung-mo School. They range in age from 7 to 18. Their curriculum includes regular arts and crafts courses.
Lee Young-shin, an arts teacher from the school, says the courses encourage the blind to be more confident. It functions as art therapy.
Lee said that once a distracted student became more focused after winning a prize at a contest.
The student became more confident. According to Lee, when students draw a face, they emphasize the nose, mouth and ears.
“Art classes offer students the chance to freely express different senses and emotions,” Lee said. “The emotions become art creations.”
Oum agrees.
She tells students that being blind is no longer an obstacle or a disorder. Instead, she talks about how they are more creative.
“There was a student with a complex disorder who was also a talented drummer,” Oum said. “During class, he made drumbeats with pens and pencils using his rhythmic and listening senses.”
Oum helped the student develop creativity by soaking his hands with paint and letting him tap drumbeats.
In no time, an artwork was created.
“The mystery of the blind is wonderful art,” said Oum, who is increasingly finding herself on a kind of artistic journey with the blind.
She said the students are a muse to her art creation as well.
As for the association, it practically had to start from square one to provide art education opportunities to the blind.
“There were hardly any Braille art books in Korea 10 years ago,” Oum said. “There aren’t that many even now.”
The Korean Association for Blind Artists has published a Braille art book recently.

And to raise public awareness, the group exhibited blind student artwork in well-known contemporary art centers.
Oum says it was a way to show the public that the blind have equal cultural rights.
Oum’s efforts are gradually raising public interest. Basic conditions for the blind are starting to develop.
In 2004, the association published a Braille art book that caused a stir at the Seoul International Book Fair in 2007.
The book emphasized the most fundamental truths in life.
In Braille letters, the book said: “Connected dots become a line and when the lines move around and dance, they become a treble clef.”
Said Oum: “A small dot can deliver an idea. It is a universal language that delivers the most basic facts.”
Changbi Publishers, a well-known publishing company, will officially publish the book early next year.
Together with the National Folk Museum, the association produced a museum brochure for the blind.
Last month, Haitai Confectionery Company Art Gallery, together with 32 artists and 10 shortsighted students, put together a sculpture festival.
The blind took photographs by listening. “They listened to the sounds of birds singing and pointed their cameras in that direction,” said Shim Hye-ran, the company’s deputy manager.
Last September Oum gave a speech at the Metropolitan Museum of Art in New York about her new way of communicating with the blind.
“Though Korea has a weak infrastructure for the blind compared to the West, scholars and artists from around the world were amazed by the rapidly developing communications culture of using art in Korea,” Oum said.
She adds, “Modern art is all about communication. Artwork introduces a new language.”
While discovering new ways of seeing, Oum continues to produce art of her own.
Next month, she is heading back to New York for the Asian Contemporary Art Fair. She was chosen as Asia’s representative and will introduce her latest work. Currently she is working on re-interpreting folktale art into modern art.
Working with blind children has allowed Oum to deepen her understanding of how to see. And the long-term project, Another Way of Seeing, continues.
“Right now, I’m in a long, dark tunnel with the blind children. Inside, I create, imagine and see with the children,” Oum said.