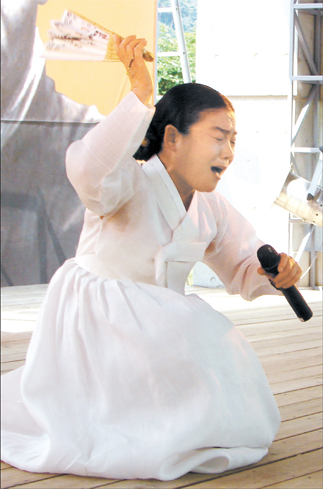 A pansori vocalist, or sorikkun.

A woman wails out a story, barely intelligible because of the weird cadence of her words. A man nearby bangs out a beat on a drum. They sustain this scene for what seems like eternity.
Sounds like some sort of ancient punishment, doesn’t it? But the scene described above is actually a performance of pansori, a genre of traditional Korean musical theater.
Today’s Koreans aren’t lying when they say that it’s difficult to enjoy pansori. Performances typically last up to four or five hours. The performers have to be seasoned professionals who have been trained since childhood. The rhythmic cycles of pansori are also difficult for the average Korean living in the 21st century to fully understand.
It’s no wonder that pansori is dying out.
Despite being named as one of the country’s national intangible cultural properties and one of Unesco’s Intangible Heritage of Humanity in 2003, pansori is fading away, at least in its strictly traditional style.
When it was first popularized during the Joseon Dynasty, pansori was in fact a sort of “pop” entertainment for the masses. This “everyman” character of the art form makes the erroneous definition of pansori as “Korean opera” particularly preposterous, as classical opera originated around a circle of elite Florentine humanists.
“Pansori is quite different from opera in that it is one person, with the assistance of a drumbeat, who acts out all the characters. The vocalist becomes a first-, second- and third-person narrative,” said Lee Sook-hi, a pansori researcher at the National Center for Korean Traditional Performing Arts. “Also, the role of the audience is very important in pansori as they are not passive observers but active participants.”
Pansori is hard to categorize as any other form of music, as seen in the literal meaning of the word: pan signifies a place of performance, and sori means sound. The art form incorporates narrative theater, song and drama. Two people carry out a pansori performance: one is the vocalist, or sorikkun and the other, the drummer, or gosu.
As the vocalist presents the main story through song, narration and even dialogue, the drummer provides the rhythm as well as assisting the vocals by shouting out chuimsae, or calls of encouragement such as “Nice,” or “That’s right!” or “Excellent!”
Both wear hanbok, or traditional Korean clothes, and the vocalist holds a fan in her right hand and a handkerchief in her left. She uses them for dramatic effect while telling the tale. While the vocalist stands, the drummer sits with a buk, or barrel-shaped drum, wedged between his legs, while holding the drumstick in his right hand. 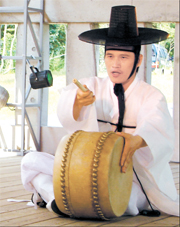 A drummer, or gosu.

Although it might seem to an observer that the vocalist is the main attraction, there is an old Korean saying that says otherwise: First the drummer, second the singer. This implies that like a conductor of a symphony orchestra, the drummer leads and inspires the singer, interjecting chuimsae and maintaining the rhythmic pattern of the performance.
The exact origin of pansori is still disputed by experts; some regard it as a variation of folk entertainment at village gatherings, while others attribute its development to chanting sessions within classic Korean literature, similar to modern poetry readings.
“Some scholars have written that pansori comes from shamanistic traditions, noting that the first pansori musicians accompanied a shaman’s ritual performance,” Lee said.
In today’s context, pansori arose as an avant garde oral tradition during the late 17th century to the early 18th century of the Joseon Dynasty. At this time, Korea was regaining political and economic stability after its continuous wars with Japan and China.
Pansori, along with genre painting, started gaining ground as a new form of entertainment depicting the conflict and duality of man through satire and irony, rather like Shakespeare’s plays in the Globe Theatre.
As pansori became popular, aristocrats started hiring vocalists and drummers for birthdays, anniversaries and other celebrations.
In several paintings from the 19th century, including ones by painter Kim Jun-geun, famous pansori singers like Mo Heung-gap were featured performing to enthusiastic audiences. But while the paintings depict vibrant interaction, the stage itself is quite simple, with few embellishments, such as torches for basic lighting at night.
Much like the scene in the paintings, the pansori stage brought people together and often represented the lives of the commoners. In most pansori stories, including “Chunhyangga” and “Heungbuga,” the protagonists were commoners struggling with inner conflicts as well as fighting social prejudice and poverty.
“Pansori started out as commoners’ entertainment. Most of the lead characters in the texts prove that people wanted some sort of catharsis, seeing good triumph over evil,” Lee said. “However, each era is different. For example, when Confucianism was predominant, pansori texts were interpreted in terms of the state, emphasizing filial duties and respect for older people.”
In Heungbuga, also referred to as “Pak Taryeong,” an immoral older brother named Nolbu challenges his virtuous younger brother Heung-bu. He kicks Heung-bu out of the house after the death of their father.
Fortune however, smiles on Heung-bu when he takes care of a baby swallow that has a broken leg. After the swallow recovers, it brings Heung-bu a gourd seed which grows to yield gold, silk, rice and jewels, as well as workers to build him a new house.
There are 12 original pansori texts but five had a special designation as “the five madang,” a playing field or courtyard in which people played traditional folk games.
The five madang are “Chunhyanga,” “Simcheongga,” “Heungbuga,” “Jeokbyeokga” and “Sugungga.”
The basis for the pansori text is seen as “Chunhyang,” which gave birth to Chunhyanga. It was a Chinese novel published in 1754 by Yu Chin-han.
The first batch of eminent pansori singers emerged during the first half of the 19th century, also called the “age of the eight great singers.” They included Kwon Sam-duk, Mo Heung-gap, Song Hung-nok and Ko Su-gwan. They paved the way for future singers to create their own personal style and add new rhythmic cycles, or changdan.
During the second half of the century, vocal techniques grew further diversified. Singers such as Pak Man-sun, Song U-ryeong and Kim Se-jong accommodated meter, tempo and rhythmic patterns, which professional vocalists molded into their own style.
These developments meant the role of the vocalists became more fluid, with different interpretations of monologues and narration made possible. The latter part of the 19th century was also crucial to the development of pansori. The scholar Shin Chae-hyo wrote down six pansori texts, a major development since before that the stories were mostly passed down as part of oral tradition.
In his book “Korea’s Pansori Culture,” Kim Jong-cul wrote: “Pansori performers always needed an audience, so that they could perform and get paid. This ‘pop’ quality, of entertaining and being popular among the masses, is a crucial part of this art form.
When Western culture started to influence Korea, the audience for pansori dwindled, turning it into a more ‘difficult’ art form rather than entertainment for the masses.”
Pansori vocalist Ahn Sook-sun, who performed at the North-South Korea summit meeting last month, has revealed in many interviews that in the past, she started a sundae, a kind of Korean sausage, restaurant with her husband. “When I was young, I wanted to run away from the pansori profession,” she said. Ahn, who started her career aged 9, learned firsthand that the road to becoming a professional pansori vocalist is long and demanding.
The globally-acclaimed 1993 Korean film, “Seopyonjae,” about a pansori singer’s struggle to make a living while at the same time passing on skills to his daughter, shows that it is difficult to keep a a dying art form alive. Scenes in which the father performs in pubs and other humble venues with little reward are particularly poignant. 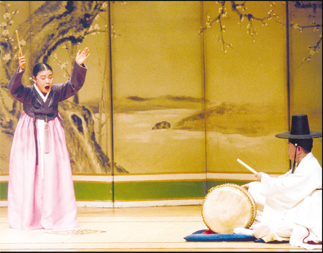 A scene from a pansori performance. [JoongAng Ilbo]

Stage director Choi Sung-shin has created “Indang’s Blues,” a modern twist on the traditional art. Featured in Seoul this month, the musical turns the old genre into something relevant to today’s audience by mixing two classic pansori stories, “Shimcheongjeon” and “Chunhyangjeon,” while adding a dose of contemporary humor and wit.
The protagonist, Chunhyang, is a mix of the two female leads in Shimcheongjeon and Chunhyangjeon. While similar to the classic pansori stories, the modern-day Chunhyang is more independent, humorous, visually vivid and articulate.
For Choi, the future potential of pansori lies in the creativity of future musical theater personalities. “Through this musical, I wanted to bring out the essence of traditional pansori, which is the classic narrative through music, and still make it fun for people like myself, who used to be skeptical.
“I think the real merit of this musical [Indang’s Blues] is reintroducing a genre of Korean music which can be relevant to people today. The laughter and the tears that pansori characters evoke are universal. The hard part is making the audience see this as well.”