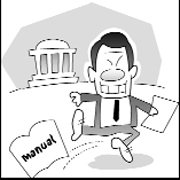 After establishing their empire, the Romans were able to control all of the Western world by systematically relying upon manuals, which they used for various battle scenarios. By organizing their military strength systematically, they expanded their territory. Losing a war could be forgiven, but negligence in following the manuals could not.
Japan became a Roman-style manual-oriented society due to incessant natural disasters in the country, particularly earthquakes and typhoons. The Japanese needed measures to cope with frequent emergencies.
How do the Japanese react in a situation with no prepared manuals?
They start to make a new manual.
In Japanese society, the manual is more than a just the standard for action. It has now become an absolute value.
This spring, Yu Myung-Hwan, the Korean ambassador to Japan, was allowed a spending limit of 100,000 yen ($870) per month on his credit card from a Japanese bank. The dumbfounded Yu called the branch manager and said, “I am the ambassador from Korea. I’ve been to several countries, but there has never been a country like this.” His argument didn’t work. The limit for a new customer with no accumulated credit is 100,000 yen. That was it. That’s what the manual says.
A well-made manual provides comfort and stability. However, blind obedience to the manual creates rigidity in the society. If you just stick to the manual, you are apt to lose creativity and vitality.
A recent academic ability test conducted in Japan showed that elementary and middle school students scored very low in the ratings of their creativity and flexibility. That must be highly related to the country’s social environment.
In Edward Gibbon’s book, “The Decline and Fall of the Roman Empire,” the empire that rose with the creation of manuals declined when it lost its creativity. Relying blindly on manuals is dangerous, although disregarding manuals is risky as well.
Politics in Korea seem to be in need of manuals.
Although people say that politics is drama without a script, too-frequent reversals of situations make the spectators feel sick. “BBK scandal,” “Third run for the presidency” and “Secret notebook containing the details of the last presidential campaign fund” are decorating recent headlines. If one misses the news just once, it would be hard to understand what is going on. If it were in Japan, people might have created a manual to appreciate Korean politics without a manual.