Korea wants a bite of the Asian tourism pie

Korea wants a bite of the Asian tourism pie 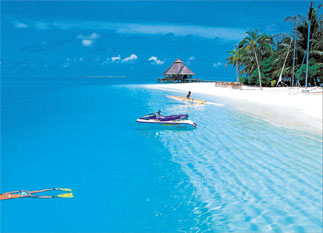 Park Jeong-gyu, 29, plans to travel to the nearby Japanese island of Hokkaido this month with his friends.
“I heard the quality of snow at ski resorts in Japan is better than here,” Park said. “But traveling to Japan also provides an opportunity to experience a different culture.”
Im Mi-jin, 27, tries to go abroad during her vacation or on the weekends as much as she can.
“I save money while I work, and when I’ve collected the right amount, I travel abroad,” Im said. “Traveling within the country is something I used to do in college. Now I want to see the outside world.”
One of her favorite destinations is Japan.
“When you think about it, the cost of traveling to nearby Jeju Island is not very different from traveling to Japan or China,” Im said. “It is more appealing to go to a destination with a different language and culture.”
A three-day trip to Jeju, which includes rental car service, costs about 270,000 won ($298) to as much to 500,000 won through Hana Tour, Korea’s largest travel agency. 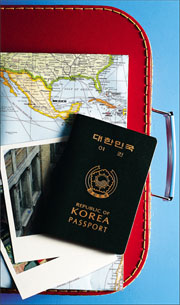 At the same travel agency, a trip to Tokyo, which leaves Incheon International Airport at around 2 or 3 a.m. on Saturday and returns early Monday morning, currently costs between 370,000 won and 500,000 won.
A five-day package tour to Shanghai and two neighboring areas ranges from 229,000 won to 449,000 won.
Park and Im are not alone when it comes to traveling abroad, especially when such low-price packages are attracting young travelers.
According to statistics released last year, 11.6 million Korean people traveled abroad in 2006.
Considering that the Korean government only began to permit overseas travel in 1989, the rising number of tourists going abroad annually is especially high.
On the other hand, foreigners who visited Korea numbered slightly over 6.1 million in 2006, according to the Korea Tourism Organization.
Last year Japanese tourists accounted for 38 percent, comprising the largest group visiting Korea. China trailed with 14.6 percent. Asians account for most foreigners traveling to Korea. The number of foreign tourists entering Korea has been gradually decreasing.
No wonder Korea’s tourism industry is suffering from a deficit that amounted to $8.5 billion last year. Korea has been suffering from a tourism deficit since 2001 and it seems the situation is getting worse by the year.
Korea’s tourism balance in 2000 was at a surplus of $637 million. The surplus reversed to a deficit of $173 million in 2005.
The deficit is expected to be higher this year, reaching $10.6 billion. According to data released by the Korea Tourism Organization, the accumulated deficit in nine months since January of this year amounted to $7.8 billion, 25 percent higher than the same period in 2006.
While tourism earnings from January through September increased a mere 3.1 percent from last year to $4 billion, spending during the same period amounted to $11.8 billion, a 16.4-percent jump from 2006. 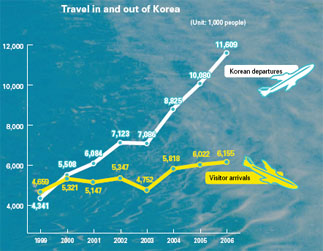 With earnings from tourism amounting to only $5.5 billion, spending is estimated to reach $16 billion this year.
Korea’s tourism industry is concerned that Korea may be squeezed between the growing tourism industry of China and the already popular destination of Japan.
In a survey by the Korea Chamber of Commerce and Industry last month, among a pool of 400 travel companies here, 64 percent said the future of Korea’s tourism industry isn’t bright because of its low competitiveness.
Only 10 percent of the travel firms are optimistic about Korea’s tourism future.
In the study, in which a score of one was the highest and four was the lowest, Japan received the highest score by infrastructure and product quality with an average of 1.4 points. Southeast Asia came in second with 2.6 and Korea came in third with 2.8.
In travel expense competitiveness, China had the highest rating with an average of 1.6, followed by Southeast Asia with 1.7 and Korea with 3.2 points. Japan had the lowest rating at 3.4.
In travel resource attractions, China received the highest with 1.8 points, followed by Japan with 2 points and Southeast Asia at 2.7. Korea came in last with 3.5 points.
The survey clearly shows Korean travel agencies see Korea as less attractive to visitors. That is because the Korean tourism industry is stuck between Japan and China.
The study went further by surveying the agencies on what foreigners do when they visit Korea. The biggest complaint of foreign visitors, at 40 percent, was the lack of attractions.
High travel costs accounted for 26 percent of complaints, with poor traveling facilities at 16 percent.
The declining inbound tourism industry in Korea may also be due in part to competition among travel agencies.
“The fierce competition by the excessive number of travel agencies in this country is driving the price down, not only on international travel but also domestic trips,” said Lee Jin-hyuk of Web Tour. “Today there are a lot of tours that only provide low-quality service to travelers.”
He added that travel agencies still have trouble with profit margins even on sold-out tours.
According to a study released by the Korea Association of Travel Agents and the Korea Tourism Association in September, in 1989 when the government lifted strict regulations on overseas travel, there were 1,215 travel agencies in Korea. The figure grew 42.5 percent to 1,731 agencies the following year.
As of September, there are 2,586 travel agencies, a 10-percent increase from 2006.
Lee said one way to improve the situation is to provide products with varying quality of services to groups according to their preference. 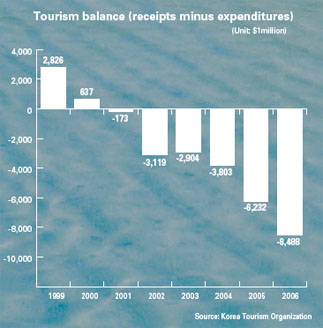 “There are travelers who seek better quality, luxury service for the appropriate price,” Lee said.
The survey also showed many travel agencies agree on the importance of the tourism industry. Of the 400 companies surveyed, 95 percent said the tourism industry was important.
Travel agencies here also said the most important change to be made is to improve tourism resources.
The second-most important suggestion was to plan strategic development like Hong Kong’s theme park or increase international events like expos.
Thirty-six percent said marketing should be strengthened, and 32 percent said more diverse tours should be developed.
The Korea Tourism Organization and the central government have been making efforts to change the current situation by promoting regional travel among Koreans and attracting foreign travelers.
One such effort was the Asia-Pacific Tourism Investment Conference and Expo, which was held last week. The conference, first held in November 2006, allowed regional governments to promote their areas while trying to draw foreign investment.
The Korean government also understands the importance of the future role the tourism industry will have in the Korean economy.
Kim Jong-min, Korea’s culture and tourism minister, said during the conference that the tourism industry will be a major growth engine in this century, and that the Korean government’s plan is to increase foreign visitors from the current 6 million to 10 million by 2010.
“The desire for tourism is increasing even within Korea as the national income is moving up from $20,000 to $30,000,” Kim said.
“The government is making large investments to help the tourism industry grow.”
Experts say Korea wants a piece of the growing Asian tourism industry pie.
The rapid growth of the tourism industry in Asia is nipping at the heels of the current No. 1 tourist destination, Europe.
Xu Jing, regional representative for Asia and the Pacific at the World Tourism Organization, said Asia’s tourism growth last year was 7.1 percent higher than the average global growth of 4 percent.
According to the report, the Asia-Pacific region came in third trailing Europe and Americas closely. Asia-Pacific recorded tourism revenue of $153 billion each in 2006, accounting for 20 percent of the $735 billion in international earnings. Europe’s earnings last year totaled $375 billion, or 51 percent of the global market share. The Americas came in second with tourism receipts of $154 billion and a 21 percent market share. The organization forecast that in coming years, Asia-Pacific will surpass the Americas in terms of arrivals and departures. Asia-Pacific has already surpassed the Americas in arrivals.
However, Korea only ranked 35th among top tourism destinations, trailing No. 4 China and No. 30 Japan.

“Geographically speaking, Northeast Asia ― or Korea, Japan and China ― has been leading the Asian tourism industry,” Xu said.
Xu said Korea should also take notice of changing trends to improve its tourism industry. For example, he said today’s travelers are “money rich and time poor.”
Because vacationers have limited time, he said they are looking for programs that provide multiple sources of entertainment in a limited amount of time.
“People emphasize maximum experiences in a shorter duration of time,” Xu said. One of the results is the increase in products of spa-related tourism, particularly in the Asia-Pacific region.
“There is an increasing development of weekend breaks,” he said.
Another new trend today is transportation. According to Xu, the biggest factor is the increasing number of LCC, or low-cost carriers.
The low-cost carriers, Xu said, will change travel.
“Because of the introduction of LLC’s, there will be a huge development in smaller, remote places and expansion of three-star hotels.
“There will also be more use of shared spaces and holiday homes,” Xu added.
The regional representative stressed that the success of Asia’s tourism lies in the enrichment of quality, not quantity.
“Too much may not be the key to success,” Xu said.
“Asia’s tourism is much too focused within the city. It needs to expand its horizons.”