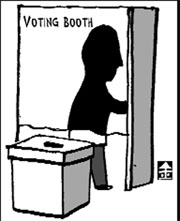 Marquis de Condorcet, a French politician and mathematician in the 18th century, believed that democratic elections do not always bring about rational results. He devised a mathematical concept to prove it.
Let’s say three candidates want to run for election to a public post. One-third of the constituency favors A, followed by B and then C. Another one-third supports B, then C and then A. The last third prefers C, followed by A and then B.
Between A and B, A will argue that two-thirds of the constituency favors him. Between B and C, B will argue he has a better chance to win, as two-thirds support him. Likewise, between C and A, C will insist two-thirds prefers him over A.
The voters made rational decisions but A defeats B, B defeats C and C defeats A twisted results indeed.
In competitions between two candidates, every candidate maintains he will win with the support of two-thirds of the voters. No candidate will withdraw his or her candidacy voluntarily in such a situation.
All three candidates will run for election, and the competition will be so fierce that only a few votes will separate the winner from the losers. As a result, one candidate could be elected with just about 30 percent of the votes. This shows that even if an election is held in the most democratic way, a person who doesn’t have support from about two-thirds of the voters can be elected. Isn’t this a paradox of a democratic election?
The 1987 election in Korea was a good example of this paradox. The three candidates, namely Kim Young-sam, Kim Dae-jung and Roh Tae-woo, competed with more or less similar support rates. In the end, Roh was elected with slightly more than 30 percent of the votes. The candidate that more than 60 percent of voters did not want was elected president.
In the United States, the 2000 presidential election proved the paradox, too. Democrat Al Gore received more popular votes but fewer electoral votes, so Republican George W. Bush won the election. Even though more people favored Gore, he lost the election because of the mechanics of the electoral system. Is there no perfect election system to reflect people’s opinion accurately?
In a way, the limitations of election systems create unexpected variables and make elections more exciting.
Lee Hoi-chang, the former chairman of the Grand National Party, is likely to run for the presidential election, creating huge turmoil in the election campaign.
His running for the presidency might be a good example of an electoral paradox.