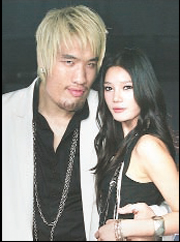 
It’s a tale as old as time. Beastly mixed martial arts star Choi Hong-man has found his Beauty ― at least in song and dance.
Choi, 27, announced last week that he has formed a dance duet called Beauty and the Beast with supermodel Kang Su-hui.
It remains doubtful whether the album will have any musical merit when it debuts later this month. Choi will mostly rap, and Kang will mostly sing.
Choi, quite the hulk at 7-foot-2 and 163.5 kilograms, also goes by the nicknames “Techno-Goliath” or “Korean monster.” The self-described Beast is active in many international leagues for his combat sport and has earned international stardom for his fighting skills and showmanship.
Before his rise, Choi practiced ssireum, traditional Korean wrestling. His musical debut should come as no surprise to fans. He is already known for his trademake center-ring victory dance.
Choi doesn’t appear to be quitting his day job soon. “Sports is the top priority,” he said. “I’m releasing this album just to make some good memories.”
And he didn’t take any singing lessons before hitting the studio. “I just want to take things easy,” he said. “I don’t feel pressured to sing well on the album.” By Chun Su-jin