Lessons in love from celebrity scandal

Lessons in love from celebrity scandal 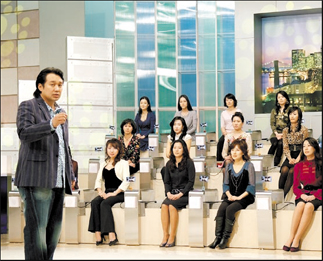 Park Chul hosting “The Park Chul Show” during his divorce scandal. [Story On]

Love grows when touched by beauty but withers when exposed to slander. At least that’s what happened when the 11-year marriage between the celebrity couple Park Chul and Ok So-ri ground to a halt. My curiosity got the better of me and I guiltily tuned in to “The Park Chul Show.”
To be honest, I wasn’t interested in the show’s content that night. I just wanted to be a voyeur and see Park in action. When he filed for divorce, he quickly became hot news around town. Everyone has been talking about him and his marriage. Airing Fridays at 11 p.m. with several reruns on the cable channel, Story On, the talk show is usually far down my to-watch list. But that was before the scandal broke.
Adding fuel to the flames is speculation that the breakup involves Ok So-ri’s alleged extramarital affair with an Italian chef at a posh Seoul hotel. She flatly denied in her recent press conference any improper relations with the aforementioned cook, but, unfortunately for Ok, the Internet is awash with rumor and innuendo. You don’t have to look hard to find photos of the dishy young chef, postings by women obsessed with the relationship, speculative media reports and blog stories. Ok said that the chef only taught her “English and cooking.” Then last Monday, Park accused Ok of an extramarital affair with his friend who is also in the entertainment business, identified only by the surname Jeong. Talk about an ugly end to a celebrated romance.
All too human and frail, I found myself succumbing to vulgar curiosity, hoping Park would say something about the rumors. Park is notorious for being a loudmouth on both radio and TV, and he has been reprimanded several times by the state-run broadcasting commission for cursing. Since his current show is on cable, and thus less restricted by censorship, Park is allowed freer rein.
One segment in the show is called “The Art of Loving,” which has nothing to do with the social psychologist Erich Fromm. Instead, it gives honest ― sometimes too honest ― insights into the love lives of married couples. The other segment features guests, mostly celebrities, with dramatic stories to tell.
It’s kind of ironic to have Park hosting this segment when his own marriage is on the fritz. Tuning in to the show, I was already prepared to be cynical. However, I ran into an unexpected ambush in the other segment featuring celebrities.
It opened with Park saying, “Everybody has his or her share of ordeals.” The show subsequently featured the actor Hong Seok-cheon, considered the first celebrity figure to come out of the closet, and the actress Lee Ui-jeong, who overcame leukemia. I was expecting to hear superficial blather about collapsing marriages. Instead I heard how Hong had to fight the social stigma of being gay.
Lee, meanwhile, had been told she had just months to live. Paralyzed and bedridden, she said her dream was to simply dance the night away before she died. After much practice, she gradually regained movement in her body. “I learned that once you want something really desperately, you can expect miracles,” Lee said. “I learned that life is incredibly precious.” By this stage, it was like watching Oprah. I was almost weeping.
By the end of the evening I found new confidence in Park’s show. I had sat down for an evening of gossipy entertainment. Instead I had learned a valuable lesson. Park’s show isn’t like Oprah’s every time, although it does often feature housewives sharing detailed stories about their sex lives. But I realize now it’s time to stop chirping on about the Park scandal and just wait for the truth to unveil itself, although it’s not that easy to forget the chef and his good looks.
The Park-Ok business is really none of our business. Call me boring, but like Lee Ui-jeong says, life is too short to waste speculating about other people’s lives.