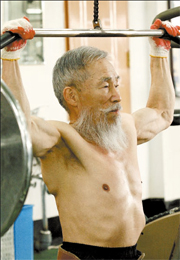 Cho Hae-suk, 75, might be the oldest guy in the gym, but you can’t deny his zest for life.

With his rippling biceps and a long gray beard, Cho Hae-suk looks younger than his years. The 75-year-old is older than most gym rats, but you can’t deny his youthful zest for life. “If you are able to walk, I suggest exercising. A healthy body is the basis of a healthy and active lifestyle, which is especially important during your senior years,” he said.
Cho started weightlifting 51 years ago, at the age of 24, right after he finished his military duty.
When he was 59, he even tried for the title of Mr. Korea, and he took third place in the senior division. The next year, he came second at a YMCA weightlifting contest and became a minor celebrity.
During one financially unstable period in his life, working out was not a priority. He had just moved to Seoul after working at a gas station on the coast and realized that with the stress of the job, he had been losing muscle tone. He took this as a sign to get back to exercising and lifting weights twice a day.
He says irregular exercise doesn’t do much for a healthy body. Regular exercise, even if only in moderation, is the key, especially enjoyable workouts.
Recently, Cho has been concentrating on abdominal exercises. “Don’t be greedy when beginning an exercise regimen. If you tear a muscle, it will rarely return to peak condition.”
Cho now works as a personal trainer at a gym in Namyeong-dong. He wakes up every day at 5 a.m. and climbs up Mount Nam. After an hour of running, he drinks cold water from the water fountain and wipes his sweaty brow.
jainnie@joongang.co.kr