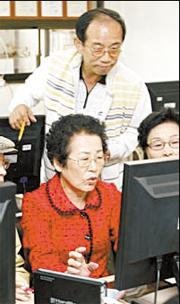 Yoon Ah-byung, 69, began a fresh chapter in life teaching IT to pensioners at a local center.

Yoon Ah-byung, 69, is your average grandma-next-door. With four children and seven grandchildren, Yoon has enjoyed her life as a housewife and a mother. After her children married and left home, Yoon began to wonder how she could make the most of her increased free time. Then she discovered a club for senior citizens to learn computer skills near where she lives in Ansan City, Gyeonggi. There she discovered a knack for computers, which opened up a second chapter in her life.
Now, she is a celebrity figure at a club called Silvery Nest, known as the star teacher for people in her age bracket and a computer whiz who teaches computer classes twice a week. So far she’s taught some 2,000 elderly citizens, from holding the mouse correctly to retouching digital photographs to making a photo gallery online. Popular courses include making digital portraits for the students’ funerals.
“My students tell me that I am a good teacher because I know their issues as elderly people dealing with computer technology,” Yoon said. “And that makes me very happy.”
These days, Yoon is busy making a digital short film with the Silvery Nest members. Titled “In Search of Yeom Seok-ju,” the film traces the memories of Yeom, an activist who fought for Korea’s independence during the Japanese colonial period. Yoon and the club members were passionate enough to fly to Jilin, China, where the activist was based, to collect data for the film. Said Yoon: “It is rewarding to teach computers to the elderly, but a bigger sense of happiness comes from the fact that I’ve found my second life.”
sujiney@joongang.co.kr