The grandmother of timely inventions

The grandmother of timely inventions 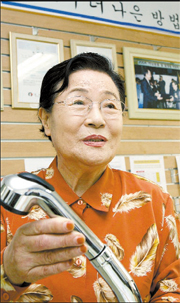 Kim Ye-ae, 78, is Korea’s Thomas Edison. She constantly explores ideas and invents. She says, “There are always better ways to live.”
Currently, Kim is the head of Easy Valve, a water-conserving device company that she founded in 1999. Her first invention was “Balbari,” a custom-made tool operated by foot. It was patented in the United States and Japan in 2000.
Kim didn’t start inventing things until she was 70. She was an elementary school teacher for 18 years, and after she retired, she became an embroidery artist. This new job put her in touch with many housewives whom she thought wasted a lot of water while washing the dishes.
She warned them about such extravagance, but later realized that switching the water faucet on and off could be tricky for older people. She then had a brain wave: Control the faucet by foot.
Kim went to the backstreets of Euljiro 2-ga, a commercial district in downtown Seoul, to ask experienced technicians if the new product would be feasible. Few were supportive.
But after three years, she finally showcased Balbari. “Nothing is impossible if we can put men on the moon,” she said.
As a member of the Korea Venture Business Women’s Association and the Korea Women Inventors Association, Kim received an award for excellence at the 2004 Korea Women Inventions Expo hosted by the Industrial Property Office.
“You should pursue what you like best in life,” Kim said. “And I feel I have contributed a little to water conservation.”