Barber of Seville sets up shop in Bucheon

Barber of Seville sets up shop in Bucheon 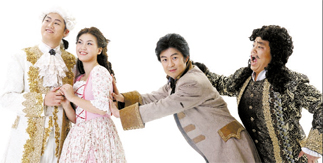 From left to right: Almaviva, Rosina, Figaro and Bartolo from Rossini’s comic opera “The Barber of Seville.” Provided by Bucheon Cultural Foundation

Bucheon, about an hour’s subway ride from downtown Seoul, is a city on a mission.
Following its foray into the world of science fiction and horror movies at this year’s International Fantastic Film Festival in July, Bucheon is now launching a new project, “Opera in Bucheon!”
The project opens with a staging of one of Rossini’s finest comic operas, “The Barber of Seville,” by the Bucheon Philharmonic Orchestra and chorus.
The show opened last night at the Bucheon Citizen’s Hall and runs through this Saturday.
The Barber of Seville is one of the many operas that the Bucheon government and the Bucheon Cultural Foundation plan to stage in a bid to motivate regional artists and increase the level of interest in performance arts among Bucheon residents.
The current feeling is that Seoul is the center of opera production, something Bucheon wants to change.
The Barber of Seville is one of Rossini’s most performed operas ― he wrote 39 during his career ― and equals Mozart’s “The Marriage of Figaro” in terms of popularity.
The opera, which Rossini finished in 13 days, is based on a story written by the French writer Beaumarchais.
The plot revolves around Count Almaviva and his efforts to win the hand of Rosina with the help of his trusted aide, Figaro, otherwise known as the barber of Seville.
Klaus Arp, formerly the assistant conductor of the Hamburg State Opera and currently a professor of music at Germany’s Mannheim University, conducts.
Im Hun-jeong, who conducted the Bucheon Philharmonic Orchestra between 1999 and 2003, is the artistic director.
The Bucheon orchestra was founded in 1988 and, under Im, made a name for itself performing Mahler’s symphonies.